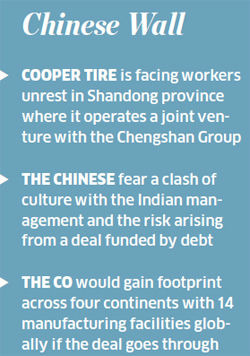 However, the Onkar Kanwar-led Apollo Tyres, which is in the midst of completing the acquisition of US-based Cooper Tire, however, said that the ongoing situation in China is not expected to have any impact on the impending deal.

The acquisition, the biggest by an Indian company in the automobile sector so far, is also driven by the opportunity of participating in the Chinese market, which is one of the fastest growing automobile markets in five years.

The Ohio-based Cooper Tire, which has two plants in China, is facing workers’ unrest in Shandong province where it operates a joint venture with the Chengshan Group. Cooper Chengshan (a 65:35 joint venture between Cooper and China’s Chengshan Group) has witnessed protests by more than 5,000 Chinese workers against the American parent company’s takeover by Apollo Tyres.

The Chinese workers and the Chinese management fear a clash of culture with the Indian management and the risk arising from a deal funded entirely by debt, which will be leveraged mostly on Cooper’s balance sheet.

In an email reply, Cooper Tire & Rubber Company vice president Communications & Public Affairs, Anne Roman told ET, “Cooper continues to work toward getting the plant operating fully again as soon as possible, including the production of all tyre brands, and we look forward to continued communications with the workers and their representatives.”

He added that all other Cooper facilities in China, and other parts of the world continue to operate as normal.

The Indian company that already owns two overseas subsidiaries – Dunlop in South Africa & Apollo Vredestein in the Netherlands – said that currently the deal is on and the issues in China are part of Cooper company.

While Cooper and Apollo both insist that the strike will not derail their deal, which they expect to complete in next few months, the Indian company added that significant amount of information has been made available to the management teams of Cooper’s global operations, including translations in Chinese to dispel any future concerns.

Apollo Tyres, which currently does not operate in the US and gets two-thirds of its revenue from India, is totally concentrating on the Cooper transaction and has put its future investment plans on the back burner, including a greenfield investment in Thailand.

The company has identified the land and negotiated with the Thai government, but not finalised any specific plans. It is aiming to close the Cooper deal by mid-October this year. Post the acquisition of Cooper â€” world’s 11th largest tyre company by sales â€” the company believes it would become a global entity with 43% revenue coming from North America, 22% from India and 18% from China.

The company would gain footprint across four continents with 14 manufacturing facilities globally if the deal goes through.

Of this, approximately 50% of the manufacturing units will be in low-cost countries as Cooper’s 40% production comes from low-cost markets such as China. It also has plants in Serbia and Mexico.