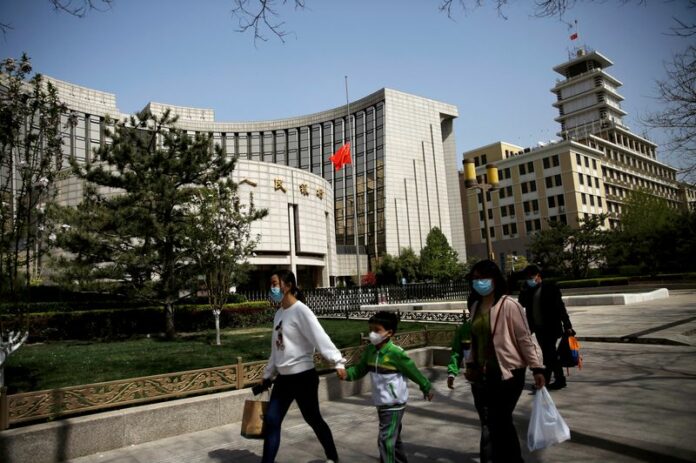 SHANGHAI (Reuters) – China kept its benchmark lending rates unchanged at a monthly fixing on Tuesday, as expected, as authorities appeared to hold off immediate monetary easing following rapid declines in the local currency and as central banks elsewhere tightened policy.

The decision came just days ahead of the Federal Reserve’s September policy meeting, at which the U.S. central bank is widely expected to deliver another hawkish interest rate hike to stem rampant price rises.

Widening divergence in the monetary policies of the world’s two largest economies could stoke fears of capital flight out of China, just as Beijing seeks to marshal resources to revive sluggish growth.

In a Reuters poll conducted this week, 21 out of 28 respondents, or 75% of all participants, predicted no change to either rate.

The steady LPR fixings came after the People’s Bank of China (PBOC) last week left its medium-term policy rate unchanged, while draining some liquidity from the banking system.

The borrowing cost of the medium-term lending facility (MLF) serves as a guide to the LPR, and markets usually use the medium-term rate as a precursor to any changes to the lending benchmarks.

“That should not come as a surprise as the MLF rate was kept unchanged earlier,” said Frances Cheung, rates strategist at OCBC Bank.

Analysts said policymakers are carefully striking a balance between supporting a slowing economy and not creating new economic risks.

Beijing’s policy divergence with most other major economies, which are raising interest rates aggressively to tame inflation, has piled pressure on the currency and limited room to further maneuver monetary easing.

China cut key interest rates in August, as Beijing boosted efforts to revive an economy hobbled by a property crisis and a resurgence of COVID-19 cases.

To cut or not to cut? https://graphics.reuters.com/CHINA-ECONOMY/LPR/egvbkrgrjpq/chart.png

But those rate cuts have accelerated the yuan’s declines. It has lost about 4% to the dollar since mid-August, breaching the psychologically important 7 per dollar mark and prompting capital outflow risks.

“Outright rate cut has always been only one of the options in the PBOC toolbox and the weak RMB has further reduced the chance of rate cut being delivered,” OCBC’s Cheung said.

The LPR, which banks normally charge their best clients, is set by 18 designated commercial banks who submit proposed rates to the PBOC every month.

Most new and outstanding loans in China are based on the one-year LPR, while the five-year rate influences the pricing of mortgages.

“If the recent economic recovery is not sustainable, the Chinese authorities are still likely to further lower interest rates,” Sun added, expecting monetary easing possibly in the fourth quarter.