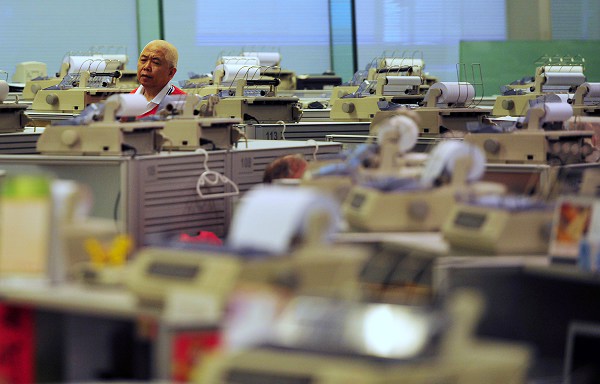 HONG KONG: Asian markets largely turned lower Monday after the US Federal Reserve delayed an interest rate rise, with traders seeing the decision as a sign of weakness in the global economy despite initially welcoming it.

Most high-yielding — or riskier — currencies, which enjoyed healthy rallies last week, also retreated as investors moved back into safer assets such as the yen.

The euro rose against the yen and dollar, however, after Greek Prime Minister Alexis Tsipras won his second election this year despite a controversial austerity deal struck with European leaders.

The trip comes as authorities continue their crackdown on “illegal market activities” in a bid to restore confidence in the country’s markets following three months of volatility that has seen trillions wiped off valuations.

And on Sunday Premier Li Keqiang called for reforms to inefficient state-owned enterprises as part of a drive to reassure investors about Beijing’s handling of a crisis gripping the world’s number two economy.

Asian markets had ended broadly higher Friday in response to the Fed’s rate decision, having feared that any rate rise would draw investment from emerging economies for higher returns in the United States.

But shares in Europe and New York tumbled as traders took it to mean the US central bank was concerned about the global outlook.

Fed chief Janet Yellen said bank policymakers cited the ongoing slowdown in China and recent turmoil on world markets as playing a role in the decision.

Analysts also said it would prolong uncertainty about when rates will eventually rise.

“Investors seemingly decided that the Fed’s baulk was a sign that things are worse in the world than they actually appear,” Raiko Shareef, a markets strategist in Wellington at Bank of New Zealand Ltd., said in an e-mail to clients.

“The Fed’s decision to hold last week means we’re in for, at the very least, another six weeks of ‘Will they, won’t they?’ Risk markets are unlikely to like the message that the Fed remains very ready to hike.”

However, Shanghai closed 1.89 percent higher. Tokyo was closed for a public holiday.

However, while there has been a flight to safety, the euro edged up after Tsipras’s victory in weekend polls, which will see him form a coalition government.

The win gives the premier a much-needed endorsement after he pushed through controversial austerity measures to prevent the country defaulting on loans and possibly exiting the eurozone.

Attention this week will be on the release of preliminary Chinese factory activity data.

China is struggling to restore confidence after an extended plunge on the Shanghai stock exchange, along with global market jitters over an ongoing growth slowdown and questions about its communist leaders’ economic management skills.

However, the Shanghai stock market rallied ahead of Xi’s US trip.

“The official visit of Chinese authorities to the US is giving support to some stocks as in these type of visits, there tends to be some type of business agreements or at least some type of cooperation agreements,” said Gerry Alfonso, a sales trader at Shenwan Hongyuan.

“Chinese companies are looking into expanding overseas and these official visits could be rather helpful.”

In the latest attempt to ease traders’ concerns premier Li said state-owned enterprises “are in urgent need of reforms as… poor management resulted in declining profits”.