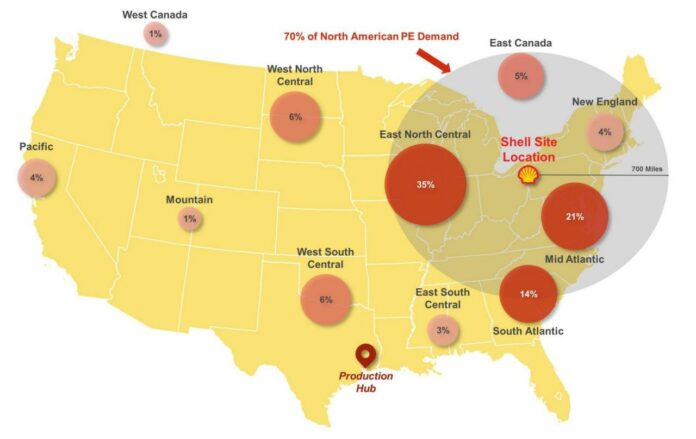 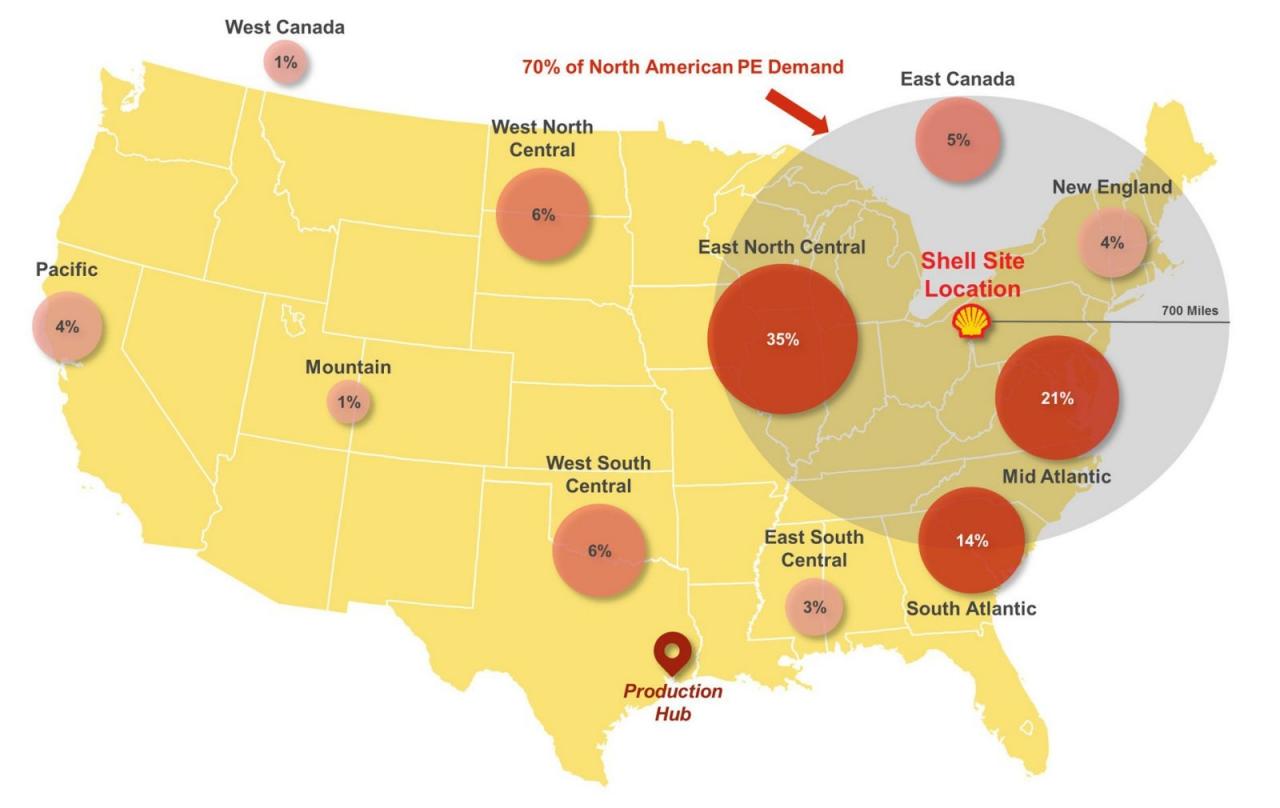 Shell Chemical Appalachia LLC According to Shell, more than 70 percent of North American polyethylene customers are within a 700-mile radius of Pittsburgh.

Shell Chemical has decided in favor of building a massive plastics and petrochemicals complex in the Pittsburgh area.

Construction is expected to start in late 2017, with production beginning “early in the next decade,” officials with Houston-based Shell said in a June 7 news release. When complete, the site is expected to have annual capacity of 3.5 billion pounds of polyethylene resin.

The project will be the first U.S. petrochemicals project built outside of the Gulf Coast of Texas and Louisiana in several decades. It will take advantage of low-priced natural gas feedstock that’s been developed in the Appalachia region in recent years. Natural gas for the project will come from the Marcellus and Utica shale regions.

The complex will be located on the Ohio River near Monaca, Pa., about 30 miles northwest of Pittsburgh. “As a result of its close proximity to gas feedstock, the complex, and its customers, will benefit from shorter and more dependable supply chains, compared to supply from the Gulf Coast,” officials said in the release. “The location is also ideal because more than 70 percent of North American polyethylene customers are within a 700-mile radius of Pittsburgh.”

They added that the project will bring new growth and jobs to the region, with up to 6,000 construction workers involved in building the new facility, and an expected 600 permanent employees when completed.

Shell first announced that it was considering the project in early 2012, but company officials told Plastics News as recently as May that the firm had not made a final decision. Shell had taken several actions to prepare the site for development, including building a heavy-haul bridge across State Route 18 that would allow trucks to reach the proposed site.

Shell also had agreed to spend up to $ 69 million to move a water intake site from the Monaca location and build a new water treatment site for Center Township. That move would include construction of a dock facility. Pennsylvania state officials already have approved Shell’s Act 2 Plan, which allows the firm to improve the environmental footprint of the site.

Most shale-based PE/ethylene projects have been aimed at the Gulf Coast, where three major expansions will open next year. Several other projects have been proposed for the Appalachian region in recent years, but the Shell project in Pennsylvania is the only one to be moving forward.

Based on seeing this progress, “there was never a doubt that that this project would proceed, only natural uncertainty as to when the decision would be made and how quickly the work would proceed to ultimate completion,” Bezaire said in an email.

“I believe some people have forgotten how bright the future is for petrochemicals in North America,” he added. “Remember, we have stable government, robust infrastructure, strong economy, advanced technology, high value markets and access to some of the world’s lowest cost feedstock. Long term, North America is the place to be.”

Calgary, Alberta-based Nova later this year will open a 1 billion pound-per-year capacity LLDPE line in Joffre, Alberta. Bezaire said that the shale-sourced line will be North America’s first in more than a decade and that it will produce “the cleanest, most consistent resin in the market.” 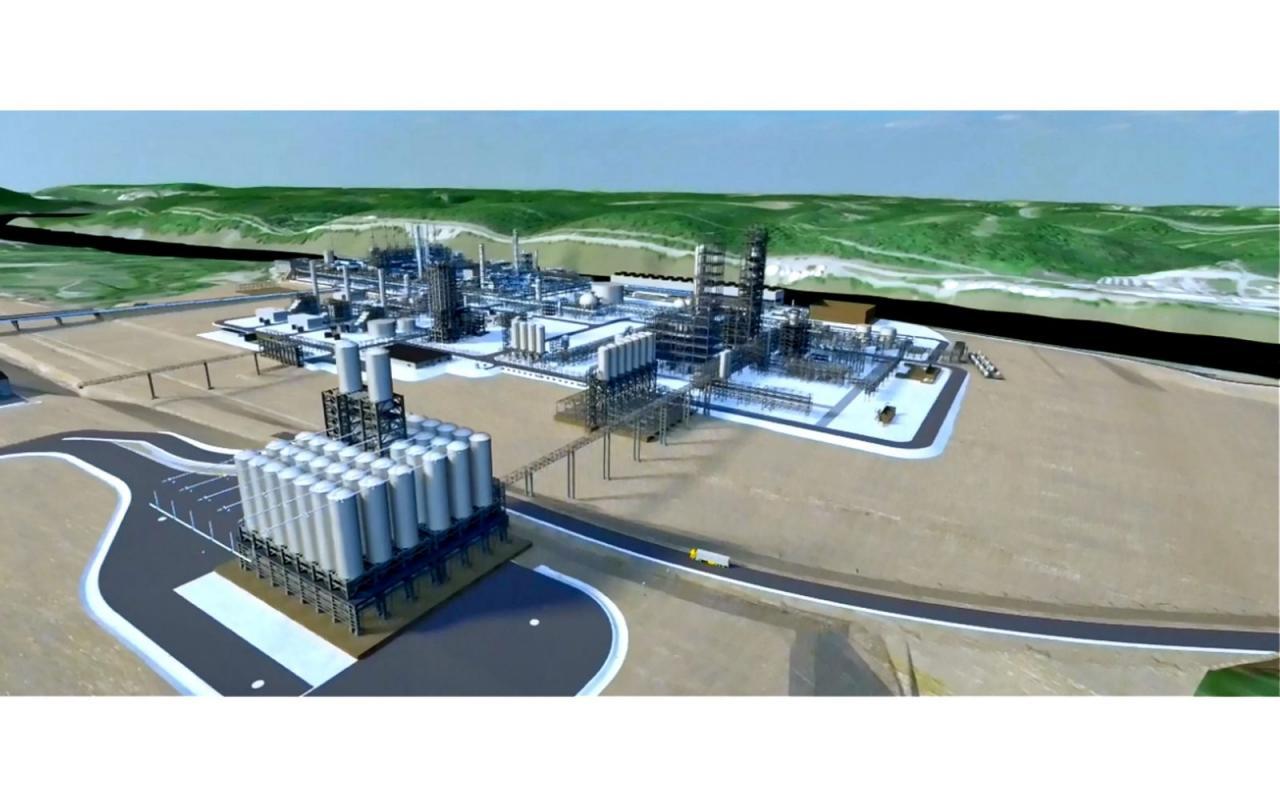 The project makes sense for Shell, according to Nick Vafiadis, global polyolefins and plastics business director with the IHS Chemical consulting firm in Houston. “It will be ideally located to service the midwest converter market, as well as exports to key international markets,” he said in an email. “The IHS forecast for crude oil and natural gas suggests that this project will be very competitive by the time it is complete.”

Phil Karig, managing director of the Mathelin Bay Associates LLC consulting firm in St. Louis, said that by locating its plant in western Pennsylvania, Shell will benefit from a number of competitive advantages.

“Close proximity to a number of processors in the Midwest and the eastern U.S. and Canada will allow for lower transportation costs compared to Gulf Coast producers,” he said in an email. “In addition, shorter delivery times will also give both Shell and their customers the opportunity to minimize resin inventories.”

Shell also will encounter less competition for skilled construction people such as welders than companies in the Gulf Coast and Louisiana “that are scrambling to find people and dealing with strong upward wage pressures,” according to Karig.

Shell’s Pittsburgh-area location “is in a good area, with a lot of molders in the region and will have a freight advantage,” said Mike Burns, PE market analyst with Resin Technology Inc. in Fort Worth, Texas. Shell’s cost “should be similar to other North American suppliers and margins will continue to be healthy,” he added.

Shell’s final decision may have been affected by Braskem SA’s recent decision not to go through with a similar project in nearby West Virginia, according to Robert Bauman, president of Polyolefins Consulting International in Spring, Texas. “The timing is reasonable,” Bauman said. “But I believe that much more than 6,000 construction workers will be needed.”