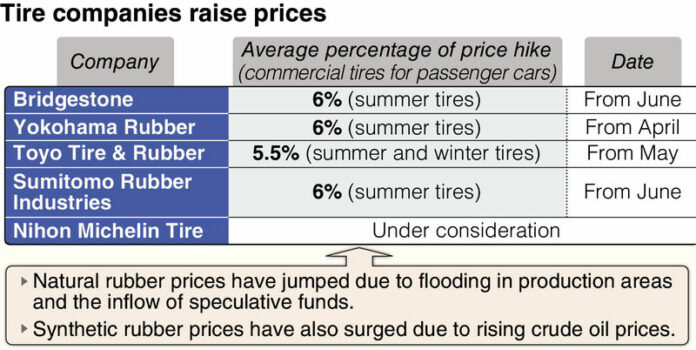 The Yomiuri ShimbunMore and more tire manufacturers are raising their prices due to costlier natural and synthetic rubber, the main raw materials for tires, and passing on the growing production costs to their customers. 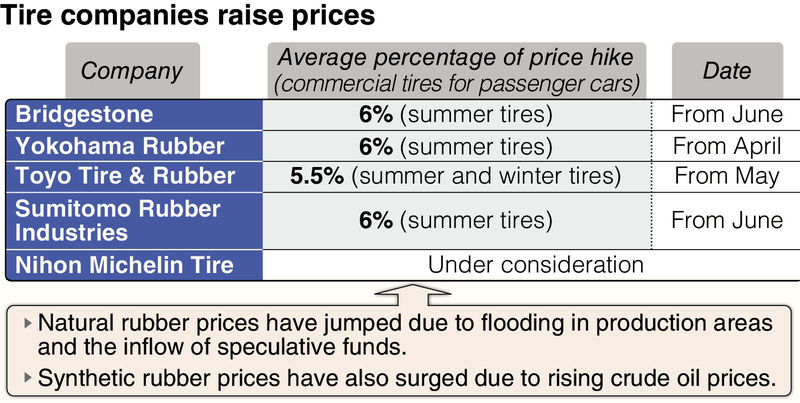 They have increased prices for commercial tires, such as those supplied to automotive supply shops, and may do the same for auto makers in the future.

On March 28, Bridgestone Corp. announced it would increase by an average of 6 percent the prices of summer tires for passenger cars to be shipped from June on.

Natural rubber is now being traded at about double its cost at the beginning of 2016. Due to expectations of more tire demand in China in the future, speculative funds have been flowing into natural rubber transactions since the latter half of 2016, apparently fueling the surge in prices.

In January this year, there was a flood in Thailand, the world’s key producer of natural rubber, causing widespread concern about lower supply. This impacted natural rubber prices, while synthetic rubber’s prices jumped in response to rising crude oil prices.

Prices for consumers are decided by retailers, such as automotive supply stores, meaning they will not immediately have to spend more. Major automotive-related goods retailer Autobacs Seven Co. plans to carefully decide whether to raise tire prices, with a spokesperson saying, “Consumers are exchanging their winter tires for summer ones, so even if we decide to raise prices, the timing will be difficult.”