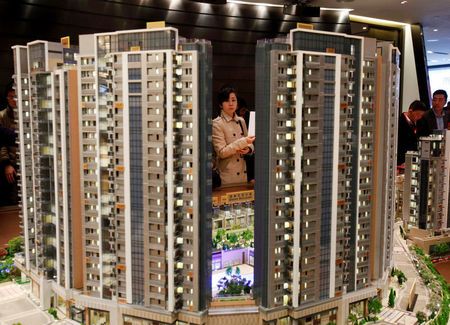 By Clare Jim and Venus Wu

HONG KONG (Reuters) – A pledge by Hong Kong’s incoming leader Carrie Lam to make the city’s vertiginous property prices more affordable could founder on the bottomless pockets of mainland Chinese developers, who are bidding up the price of land.

Home prices in Hong Kong have jumped 364 percent since 2003, while the median monthly household income has risen just 61 percent, pushing home ownership out of reach for many.

While the mass protests that paralysed parts of Hong Kong for 79 days in 2014 were primarily about demands for full democracy from Beijing, many were also motivated by the rising cost of living in the city, and the cost of accommodation in particular.

A typical Hong Kong apartment costs 18.1 times gross annual median income, according to research group Demographia, and the city topped its survey of the world’s most expensive places for accommodation for the seventh straight year. Second-placed Sydney was a long way behind on 12.2.

“Anything over a multiple of 5.1 is usually deemed as being ‘severely unaffordable’,” said Denis Ma, JLL’s Head of Research in Hong Kong.

With most of the city’s more than 7 million citizens living in cramped apartments – some no bigger than a parking space – Lam, who takes over as chief executive on July 1, is aiming to tackle the problem by increasing housing and land supply.

“When there’s overseas capital investment in Hong Kong, it will stimulate the local property market. If the government wants the housing market to grow at a stable rate, this will be a very big challenge for them,” Mak said.

Chinese companies successfully bid for six out of 27 plots of land sold by the government in the fiscal year starting April 2016, Lands Department data shows, but in money terms they accounted for 44 percent of total transactions.

In the previous fiscal year, Chinese firms paid more on land deals than their Hong Kong competitors, taking up 55 percent of the value and nearly half of the land sold.

“There’s still a gap between ‘flour and bread prices’ in Hong Kong, but in China the prices are basically the same, so I boldly predict that more and more Chinese developers will come to Hong Kong to buy land in the future,” KWG chairman Kong Jian Min told an earnings conference last month.

The direct impact of this influx on home prices is stark in the Kai Tak district, overlooking Victoria Harbour. Prices there rose as much as 50 percent in less than a year, consultancy JLL said, after Chinese conglomerate HNA Group bought four land parcels in the past five months at eye-popping prices.

Hong Kong’s homegrown property companies are being edged out of their own market and are looking overseas to do business.

“In the past there were 20 developers fighting for land, but now with Chinese developers joining, it means another 20 more,” he told a conference in February, adding that he was glad his company had already invested elsewhere and had plans to expand in the UK and Australia.

“I think it’ll be very difficult for Hong Kong’s small and medium developers to win a tender; it wouldn’t surprise me if Hong Kong developers became landlords relying only on rental income (from commercial properties) after 10 years,” he said.

Lam has already conceded in an interview with the Hong Kong Economic Journal there is nothing she can do to stop outside capital competing in the land bids.

Even established professionals say buying a home is an increasingly daunting prospect and doubt that government will succeed in holding down prices.

“They won’t be able to help us,” said 30-year-old accountant Mok Ho-man.

“Buying a flat is not an impossible dream … but it will only get more and more difficult.”

(Reporting By Clare Jim and Venus Wu; Additional reporting by Katy Wong; Editing by Anne Marie Roantree and Will Waterman)