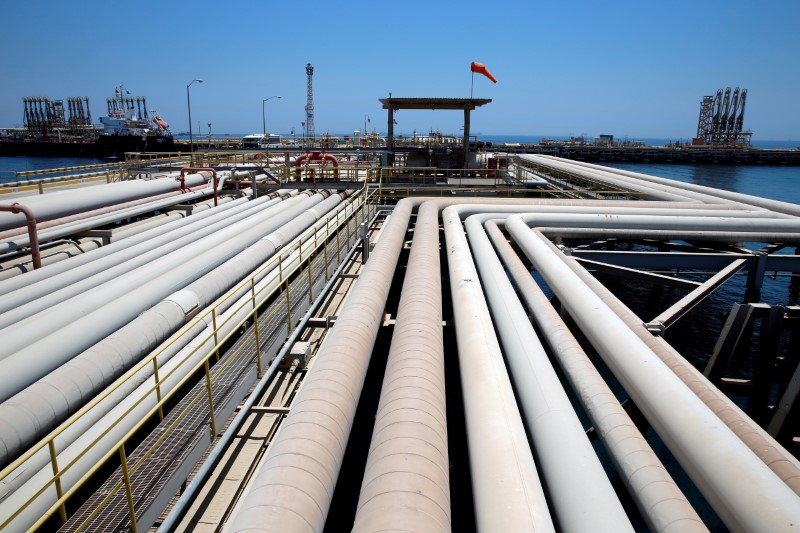 LONDON (Reuters) – Top oil exporter Saudi Arabia has boosted supply to 10.70 million barrels per day in June, close to a record high, a Reuters survey found on Friday, a sign the kingdom wants to make up shortfalls elsewhere in the group and moderate prices.

That is up 700,000 bpd from May and means oil supply from the Organization of the Petroleum Exporting Countries will be higher in June despite a drop in Iranian exports and outages in Libya, according to the survey’s preliminary results.

“The Saudi number for June will be very, very high,” an industry source who tracks the kingdom’s oil output said. “Surprisingly high.”

The Saudi move is a clear indication it wants to moderate oil prices – which this year hit $80 a barrel for the first time since 2014, prompting consumers like the United States to raise concerns – and to make up shortfalls in other OPEC members.

OPEC and a group of non-OPEC countries agreed on Saturday that they would return to 100 percent compliance with previously agreed oil output cuts, after months of underproduction by OPEC countries including Venezuela and Angola.

The Saudi increase comes as the United States has urged Riyadh and some other OPEC members to raise output to compensate for supply losses caused by renewed U.S. sanctions on Iran.

Iran has been infuriated by the Saudi supply boost and its scale has surprised others in OPEC, sources said.

“Our resolution does not allow any member to produce more than their quota,” Iran’s OPEC governor Hossein Kazempour Ardebili told Reuters. “If they do, it means the State Department is running OPEC.”

Saudi Energy Minister Khalid al-Falih said on Saturday the kingdom would increase output by hundreds of thousands of barrels, with exact figures to be decided later.

Saudi production usually rises in the hot summer months as more crude is used in domestic power plants. The previous high for Saudi output is 10.72 million bpd in November 2016.

Exports have been rising in June as well, the survey found. An industry source estimated shipments had climbed to around 8 million bpd in the last two weeks. They averaged 7.3 million bpd in April, the most recent official figure.

Saudi output in July is likely to show a further jump. An industry source familiar with Saudi production plans said on Tuesday the kingdom aimed to pump 11 million bpd.

The full Reuters OPEC survey for June will be published on Monday.

The OPEC survey is based on shipping data provided by external sources, Thomson Reuters flows data and information provided by sources at oil companies, OPEC and consulting firms.