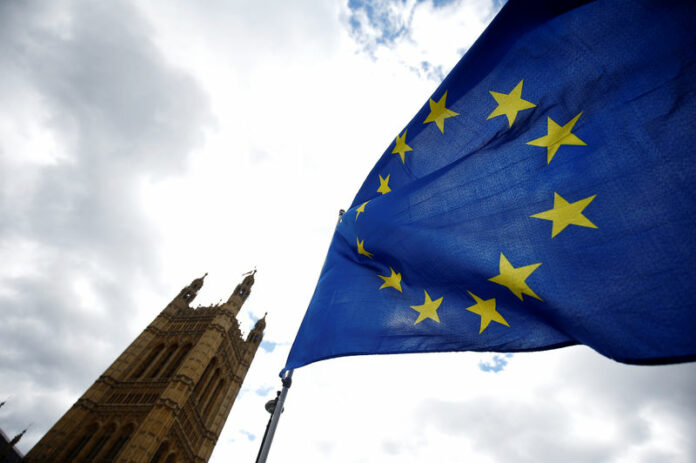 © Reuters. Anti-Brexit demonstrators wave EU flags opposite the Houses of Parliament, in London

LONDON (Reuters) – Britain’s banks and insurers must plan for a “hard” Brexit in case a transition period is not in place next March, a senior British regulator said on Thursday.

“With eight months until we exit the European Union in March 2019, it is important we all — regulators and industry — continue to plan for a range of scenarios,” said Nausicaa Delfas, head of international strategy at the Financial Conduct Authority.

“Across the FCA, together with colleagues from the Bank of England and the government, we have been working to develop a number of safeguards and contingencies, in the event of a hard Brexit, to ensure that ‘day 1’ works smoothly,” Delfas told an event held by TheCityUK.

Britain and the EU have agreed on a transition deal bridging Brexit in March next year and the end of 2020, but it has yet to be ratified, meaning financial firms based in Britain could face an abrupt end to EU market access.

EU banking, insurance and markets watchdogs have already warned their respective sectors to be ready for a hard Brexit. The bloc’s executive European Commission is set to broaden these warnings to EU members on Thursday.

Britain has already said it would legislate to ensure that cross-border financial contracts like derivatives and insurance policies can still be serviced after March, but the EU has so far said it was up to the private sector to take such action.

So far it is unclear what sort of EU market access financial firms in Britain will have after the transition period ends, prompting many banks and insurers to have new hubs up and running in the bloc by next March to avoid potential disruption.

“In terms of our longer-term future – our markets will remain highly integrated whatever the outcome of Brexit. We believe a good outcome is achievable – one that is in the interests of both the UK and the EU,” Delfas said.