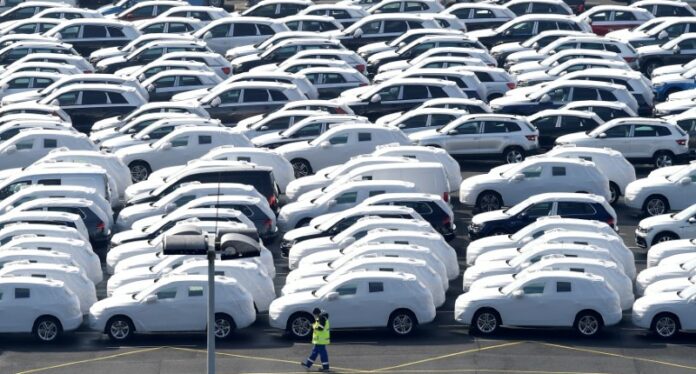 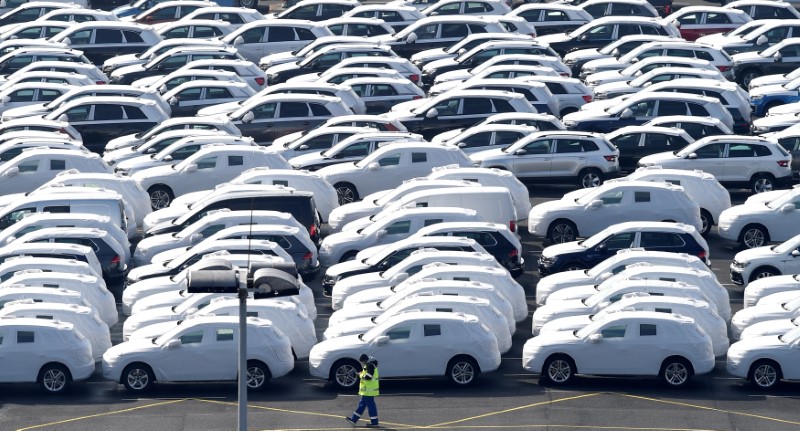 © Reuters. FILE PHOTO: Volkswagen export cars are seen in the port of Emden

FRANKFURT (Reuters) – The U.S. and euro zone economies remain a world apart and growth data due in the coming days will only highlight the widening gap, suggesting that monetary policy will continue to move in opposing directions on the two sides of the Atlantic.

Indeed, meeting on Thursday in the middle of the summer lull, the European Central Bank is expected to point to ample and potentially growing risks to the outlook, which could weigh further on sentiment and suggest that any further removal of stimulus would come in the smallest of increments.

While the bank agreed last month to end its landmark bond purchase scheme by the close of the year, the dovish undertone of that decision pushed out rate hike expectations almost to the end of next year.

Supporting the ECB’s caution, a key consumer confidence indicator due on Monday is expected to dip further while PMI figures due a day later are also seen pointing to more softening.

“The jury is still out on whether the euro zone only went through a soft patch in the first months of the year or is actually already in the middle of a protracted cooling,” ING economist Carsten Brzeski said.

The IMF, writing in its regular review of the bloc, even warned this week that risks to the outlook were ‘particularly serious’, increasing the chance of a hard landing as Brexit and reform complacency by euro zone governments were adding to risks.

Still, the ECB is likely to argue that growth indicators point to some stabilization, keeping the bloc on track for an expansion that is well below its peak rate just a few months ago but still above what is considered its potential.

The bank could also harden up its language on ending asset buys this year to signal that there would be no going back on the decision, but the dovish tone of the guidance on the first rate hike is all but certain to remain.

To view a graphic on Contributions to U.S. GDP, click: https://reut.rs/2JDhUDy

U.S. growth is meanwhile seen having surged to a four-year high of 4 percent in the second quarter, twice the first quarter’s rate, with analysts seeing an upside risk to the consensus.

Although U.S. GDP figures tends to swing wildly, the data point to healthy growth, even if Fed Chair Jerome Powell warned this week that a developing global trade war could start to weigh on investment and sentiment

“The bottom line is a more protectionist economy, is an economy that is less competitive, less productive,” Powell told lawmakers.

Still this remains only a theoretical outcome as hard data have yet to show any meaningful deterioration, indicating that political turmoil has yet to do actual damage to the economy, which is running at full employment and full capacity.

“Private consumption has benefited from strong job growth and the resulting rise in labor income,” Commerzbank (DE:) said in a note to clients. “With the exception of residential construction, private investment has also increased considerably.

“In addition, foreign trade has contributed an estimated 1.5 percentage points to growth,” Commerzbank added, noting that this was likely the peak for the U.S. expansion.

The growth reading should be strong enough to make a decision to hike rates in September relatively easy, economists said, and would keep the Fed on track for another hike this year in December.