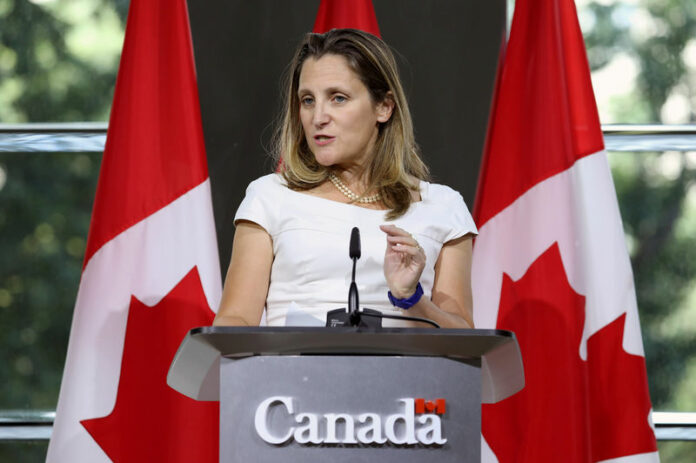 WASHINGTON (Reuters) – Canada’s top trade negotiator said on Friday she and her U.S. counterpart were making “very good progress” in talks to save the North American Free Trade Agreement amid increasing Canadian optimism that a deal could be reached.

Canadian Foreign Minister Chrystia Freeland repeated her upbeat assessment of the negotiations, again terming them constructive, as she spoke to reporters after talks in Washington with U.S. Trade Representative Robert Lighthizer.

The main sticking point in discussions appeared to be Canada’s dairy quota regime, according to the White House’s top economic adviser, Larry Kudlow, who spoke before the start of the latest talks.

Kudlow spelled out “M-I-L-K” in an interview with Fox Business Network for emphasis.

President Donald Trump has struck a trade deal with Mexico and threatened to push ahead without Canada, a move that would kill NAFTA, which covers $1.2 trillion in trade between the three countries, and further spook financial markets.

“I’m working on Canada now,” Trump told reporters aboard Air Force One. “You know, people can say, ‘Oh I’m too tough on Canada.’ Look, Canada’s been ripping us off for a long time. And now they’ve got to treat us fairly.”

A Canadian source, who declined to be named given the sensitivity of the situation, said Canadian negotiators thought it was quite possible the talks would continue until the end of this month.

Tens of billions of dollars in Chinese imports have been slapped with U.S. tariffs and a new round of duties is due to be triggered soon.

For its part, Canada has used the provisions of NAFTA’s dispute resolution mechanism to defend its lumber exports to the United States. Washington charges that Canadian lumber unfairly undercuts prices on U.S. lumber.

Negotiators and their staff have held several late-night sessions in a bid to overcome disagreements this week.

“We are really in a continuous negotiation phase,” Freeland said.

Despite pressure from Washington to sign onto a deal similar to the one agreed with Mexico, Ottawa has resisted. Canadian officials also are aware that U.S. business and labor groups are pushing Trump to keep NAFTA as a trilateral deal.