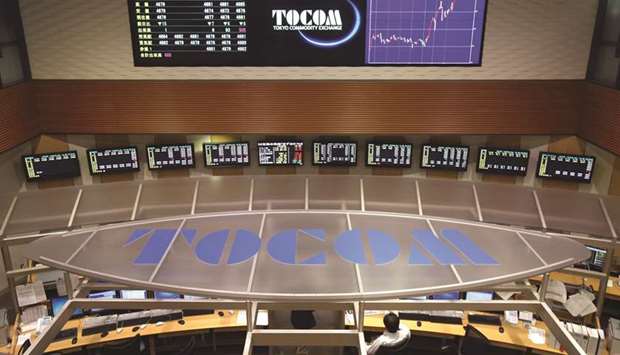 Tokyo Commodity Exchange Inc (Tocom) is seeking to double rubber trading with the launch of a new contract next month that targets Thai producers and Chinese consumers.

The Tokyo Commodity Exchange logo is displayed on the Tocom trading floor in Tokyo (file). Tocom is seeking to double rubber trading with the launch of a new contract next month that targets Thai producers and Chinese consumers.

Technically-specified rubber futures will start trading on October 9, according to President Takamichi Hamada. Trading volumes will probably exceed ribbed-smoked-sheet rubber, the type currently traded on Tocom, in the short term, Hamada, 68, said in an interview in Tokyo. The exchange is also aiming to surpass volumes on Singapore Exchange, he said.

Volumes have declined in recent years as local investors focused on more volatile, liquid markets and on reluctance from Japanese manufacturers to use commodity futures for hedging.

The listing of TSR, the most- produced and consumed type of natural rubber in the world, updates the exchange’s offerings to better reflect the physical market.

Tocom will list yen-denominated contracts for the benefit of Japanese hedgers and speculators, according to Hamada. TSR is already traded on the Singapore Exchange, which lists US dollar-based futures. “We want to regain the position as the provider of benchmark rubber prices to the world,” Hamada said.

There is potential demand for futures contracts that address country of origin and geographic location issues, according to Michael Coleman, director of RCMA Group.

The current premium and discount structure between the various origins of TSR20 rubber has little transparency and no effective means to hedge basis risk against the generic SGX contract, he said.

SGX said in an emailed statement that it welcomes increased participation as it will broaden liquidity.

Its contracts serve as a bellwether for physical rubber and are a risk-management tool, allowing participants to benchmark prices and manage volatility. The trading volume of RSS rubber futures on Tocom fell 9.7% to 2.14mn lots in 2017, the equivalent of about 10.7mn tonnes and a third straight decline, according to data from Japan Commodity Clearing House Co.

Tocom was slow in adding TSR as its members voiced concern that the liquidity of the RSS market may decline further with the listing of the new product, said Kazuhiko Saito, analyst at Fujitomi, a broker in Tokyo. RSS is used by small and mid-sized makers of rubber parts for machinery and buildings.

While both TSR and RSS are used mainly in tire manufacturing, TSR production has climbed because of consistency in quality and as low prices discourage RSS output, according to Salvatore Pinizzotto, the secretary-general of International Rubber Study Group.

“RSS is predominantly produced at farm level and TSR is produced in factories, which leads to consistency in quality,” Pinizzotto said by e-mail. Farm-level production of RSS involves more time and labour commitments, so declining natural-rubber prices aren’t encouraging small farmers to produce the variety, he said.

Japan imported 546,791 tonnes of TSR last year, with 81% from Indonesia and 15% from Thailand, according to data from the Ministry of Finance. RSS imports were 131,577 tonnes, with purchases from Thailand representing 95% of the total.

Bridgestone Corp, Japan’s largest rubber user, will carefully watch the development of the TSR futures market, the company’s spokeswoman said in an e-mail. Sumitomo Rubber Industries, the second-biggest consumer, has no plan to participate in the market, its spokesman said.

In China, about half of natural rubber used by local manufacturers is TSR that’s imported from Thailand, said Gu Jiong, analyst at Yutaka Shoji, a broker in Tokyo. Most of the remaining volume is compound rubber, or mixture of natural and synthetic rubber, he said.

Tocom will allow physical delivery at three ports in two countries – Bangkok and Laem Chabang in Thailand and Penang in Malaysia.

This makes it easier for traders to supply their clients as physical delivery for the RSS rubber contract must be made at exchange-designated warehouses in Japan, according to Hamada.

Oil Up over Supply Concerns

Oil Up over Supply Concerns

Gold Up Over Weakening U.S. Dollar