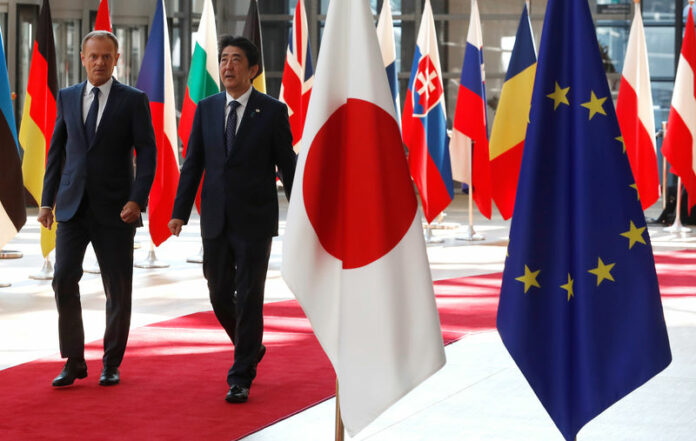 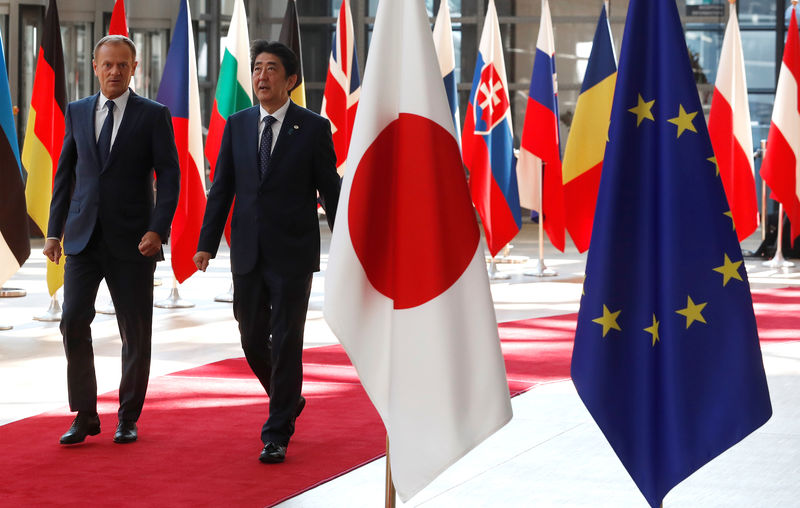 © Reuters. FILE PHOTO – Japan’s PM Abe is welcomed by EU Council President Tusk at the start of a EU-Japan summit in Brussels

BRUSSELS (Reuters) – European Union and Japanese plans to form the world’s largest free trade area cleared a significant hurdle on Monday when EU lawmakers specializing in trade backed a deal that could enter force next year.

The European Parliament’s international trade committee voted 25 in favor to 10 against to clear the deal for a final vote in the parliament’s full chamber set for December 13.

An agreement would bind two economies accounting for about a third of global gross domestic product and also signal their rejection of protectionism.

Both have faced trade tensions with Washington and remain subject to U.S. tariffs imposed by President Donald Trump on imports of steel and aluminum.

Japan had been part of the 12-nation Trans-Pacific Partnership that Trump rejected on his first day in office, turning Tokyo’s focus to other potential partners – such as the European Union.

The EU has also sought other partners after freezing TTIP (Transatlantic Trade and Investment Partnership) negotiations with the United States in 2016. It concluded an updated trade deal with Mexico earlier this year.

Both have since agreed to start trade talks with Washington.

The EU-Japan agreement will remove EU tariffs of 10 percent on Japanese cars and 3 percent for most car parts. It would also scrap Japanese duties of some 30 percent on EU cheese and 15 percent on wines and open access to public tenders in Japan.

It will also open up services markets, in particular financial services, telecoms, e-commerce and transport.

The EU is mindful of protests against and criticism of the EU-Canada Comprehensive Economic and Trade Agreement (CETA) in 2016, which culminated in a region of Belgium threatening to destroy the deal. It finally entered force in 2017.

Critics say the EU-Japan agreement will give too much power to multinationals and could undermine environmental and labor standards, the latter because they say Japanese employees face tougher conditions and less adequate union representation.

Belgium’s regions have though given their backing.

Both Brussels and Tokyo want the agreement to enter force early in 2019, before Britain leaves the EU at the end of March.

If it does, it could apply automatically to Britain during a transition period until the end of 2020 and offer comfort to the many Japanese car makers serving the EU from British bases.