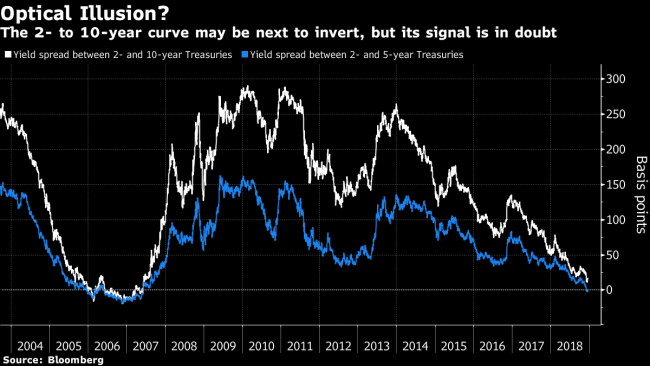 For Some, Curve Inversion Isn’t If or When, But How Deep

(Bloomberg) — The recession signaled by the inverted U.S. yield curve may be further off than it appears.

The spread between shorter- and longer-maturity Treasury yields is close to the narrowest since 2007, and sections of the front end of the curve have already turned negative. Another couple of Federal Reserve interest-rate hikes — one of which is expected Wednesday — may extend that inversion. But while slowing growth and market turbulence have sharpened the market’s focus on recession risks, it’s too soon to read that signal from the curve, strategists say.

First, the curve may steepen if the Fed endorses the market’s reduced expectations for rate increases in 2019 — that is, if Wednesday’s updated projections suggest policy makers favor fewer hikes than the three signaled in September. Another reason not to panic about inversion, according to State Street’s Lee Ferridge and Jim Caron at Morgan Stanley (NYSE:) Investment Management, is that the curve isn’t as close to negative territory as it looks. They argue that the Fed’s crisis-era asset purchases are still artificially depressing long-term yields.

“Zero isn’t zero in this world in terms of the curve,” said Ferridge, head of North America macro strategy. “To say it’s a real recession signal I think you have to be much more negative than just below zero.”

Looking at the two- to 10-year section of the curve, fixed-income portfolio manager Caron says the compression from around 79 basis points in February to this month’s post-crisis low of nine basis points is a clear indication of slowing growth. But with the jobless rate the lowest since the 1960s, it’s not signaling a slump, even if that spread turns negative, from about 16 basis points on in early London trading in Wednesday.

“I would say the signal strength for the yield curve to predict a recession would increase substantially at around -20/-25bps,” Caron said.

This view is backed up by research last year from some Fed economists, who estimate that the central bank’s government-debt holdings was still subtracting around 65 basis points from the term premium on the 10-year yield as of Dec. 1. This pressure is gradually diminishing as the Fed’s portfolio continues to shrink, according to the Fed paper.

But there’s no clear consensus on this effect, as shown by more recent analysis from the San Francisco Fed. The research found “no clear evidence in the data that ‘this time is different’ or that forecasters should ignore part of the current curve flattening because of the presumed macro-financial effects of QE.”

SocGen’s head of U.S. rates strategy, Subadra Rajappa, shares this skepticism, pointing out that the symbolism of even a modest inversion can damage investor sentiment. She sees risks in downplaying the curve’s behavior as a function of exceptional circumstances, as former Fed Chairman Alan Greenspan did in 2005 while a housing bubble brewed.

“Last time it was Greenspan’s ‘conundrum’ and outsized foreign demand for Treasuries and this time it’s QE,” Rajappa wrote in an email. “But an inversion is an inversion regardless of what technicals are driving the long end of the curve.”