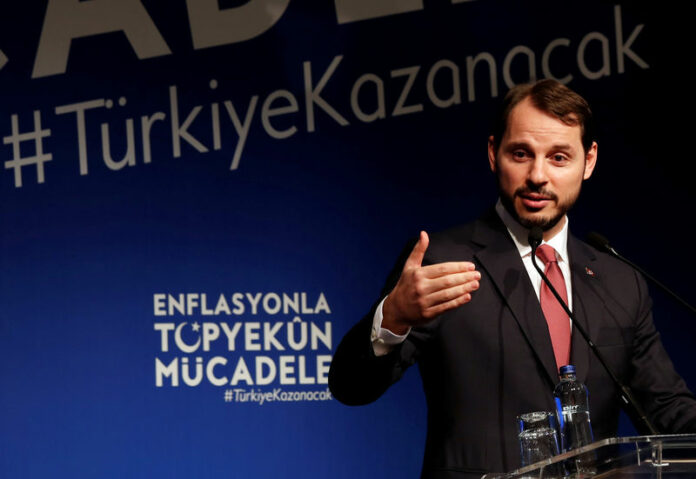 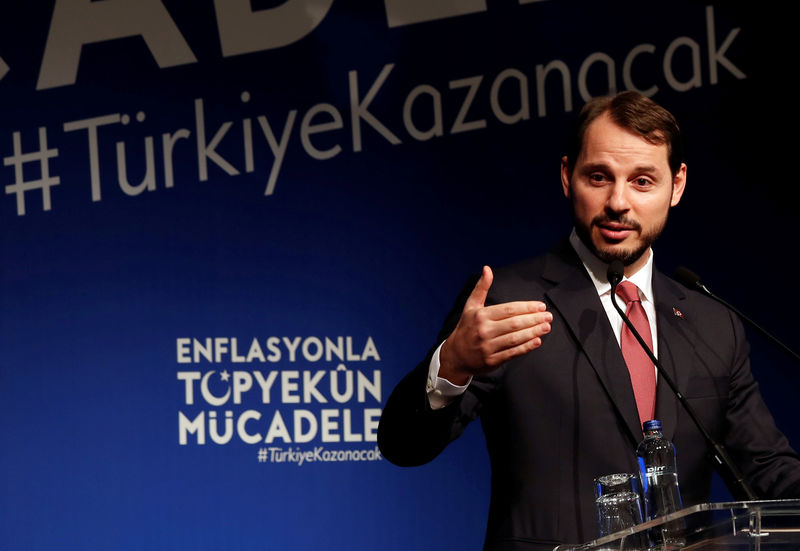 © Reuters. Turkish Finance Minister Albayrak speaks during an event to announce his programme to fight inflation, in Istanbul

After years of strong growth, fueled by break-neck construction projects and cheap loans, Turkey’s economic growth slowed sharply in the third quarter of last year to 1.6 percent. A Reuters poll last week found that it has started contracting and will not grow again until the second half of this year.

The slowdown has underscored the serious damage caused by a currency crisis last year when the lira lost 30 percent against the dollar, driving inflation up to 25 percent and forcing the Central Bank to hike interest rates drastically.

Albayrak predicted the slowdown would be less serious than economists believe. Growth will bounce back strongly and the government’s overall 2019 growth target of 2.3 percent was still in reach.

“Currently we don’t see any recession, there is no minus growth,” Albayrak said on the sidelines of the World Economic Forum in the Swiss ski resort of Davos.

Turkey announced several measures in the last four months to soften the economic slowdown, including a temporary lifting of taxes on purchase of cars and white goods and an early transfer of 37 billion lira of Central Bank profits to the Treasury.

It also hiked the minimum wage by a quarter and rolled out a $3.7 billion loan package for small businesses two weeks ago.

“The necessary actions that we have taken so far, starting from late October…definitely has a significant effect,” Albayrak said.

The wage rise would have only a muted impact on inflation and was not a sign that President Tayyip Erdogan’s government, which could lose control of some large Turkish cities in March local elections, was loosening purse strings.

“When it comes to fiscal slippage … it is not going to happen,” he said.

The minister said he had always insisted that interest rates were the central bank’s business, not his.

“I don’t know what they are going to do (at their next policy meeting) in March. But I know whatever they do, they do on an analytically rigorous basis.”

Last year’s meltdown in the lira was exacerbated by tensions with the United States centered on the two-year detention of an American pastor in Turkey.

But, pointing to a temporary waiver for Turkey’s gas imports, Albayrak said Ankara had no immediate plans to cut Iranian imports, although it aimed to reduce dependency on energy imports in the longer term.

He also played down a tweet from Trump last week that Turkey could face economic devastation if it attacked the U.S.-backed Kurdish YPG militia in northeast Syria once U.S. troops pull out.

“When you compare the effect of his remarks with the ones that we had last summer, it was significantly less,” Albayrak said. “Despite the headlines, the underlying cooperation between the two countries is pretty sound.”