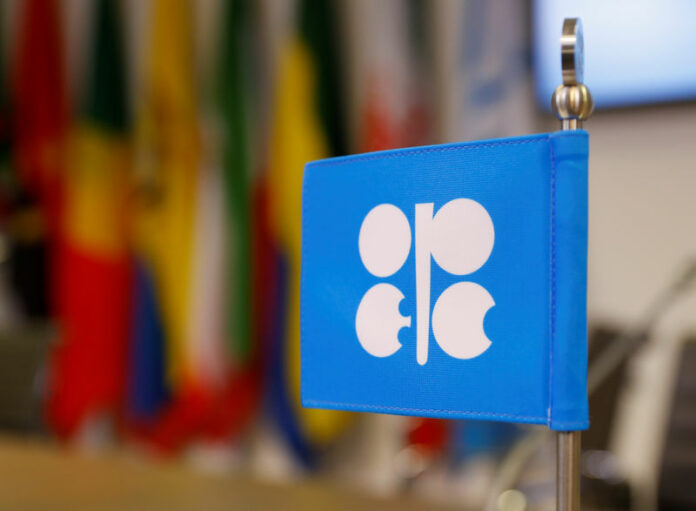 © Reuters. The logo of the Organization of the Petroleum Exporting Countries (OPEC) is seen inside their headquarters in Vienna

LONDON (Reuters) – OPEC oil supply has fallen in January by the largest amount in two years, a Reuters survey found, as Saudi Arabia and its Gulf allies over-delivered on the group’s supply-cutting pact while Iran, Libya and Venezuela registered involuntary declines.

The 14-member Organization of the Petroleum Exporting Countries has pumped 30.98 million barrels per day (bpd) this month, the survey showed on Thursday, down 890,000 bpd from December and the largest month-on-month drop since January 2017.

The survey suggests OPEC is almost three quarters of the way in delivering supply cuts that started on Jan. 1 in an effort to avert a glut, even though the group’s second-largest producer Iraq and some smaller members pumped above agreed levels.

An OPEC official said he hoped more members would deliver on their pledges and that the drop in supply so far was acceptable, calling it a “good start”.

has risen to $62 a barrel after a dip below $50 in December, boosted by the Saudi cuts, a host of involuntary curbs in other OPEC countries and the prospect of lower supply from Venezuela after U.S. President Donald Trump this week imposed sanctions on its oil industry.

OPEC, Russia and other non-members – an alliance known as OPEC+ – agreed in December to reduce supply by 1.2 million bpd from Jan. 1. OPEC’s share of the cut is 800,000 bpd, to be delivered by 11 members – all except Iran, Libya and Venezuela.

In January the 11 OPEC members bound by the supply-limiting agreement achieved 70 percent of the pledged cuts, the survey found. Further declines in Iran, Libya and Venezuela boosted the total OPEC decline to 890,000 bpd.

The latest OPEC+ deal came months after they had agreed to pump more oil, which in turn partially unwound their original supply-limiting accord that took effect in 2017.

The biggest drop in supply came from Saudi Arabia, OPEC’s biggest oil producer, which pumped 350,000 bpd less than in December, the survey showed.

Saudi supply in November had hit a record-high 11 million bpd, after Trump demanded more be pumped to curb rising prices and make up for losses from Iran. The kingdom rapidly changed course as prices slid on the prospect of oversupply in 2019.

The second- and third-biggest drops occurred in Kuwait and the United Arab Emirates, which like Saudi delivered a larger cut than required under the deal, the survey found.

Of the three OPEC members exempted from making voluntary cuts, Libyan production fell the most as unrest kept the country’s biggest oilfield, Sharara, offline for a month.

Output from Iran declined further as U.S. sanctions discouraged companies from buying its oil. Iran has managed to maintain crude exports of as much as 1 million bpd, helped by sanctions waivers and its efforts to keep selling crude.

Production in Venezuela, once a top-three OPEC producer but whose output has been sliding amid the country’s economic collapse, posted a further drop in January, the survey found.

The U.S. sanctions imposed on state oil firm PDVSA this week are keeping tankers stuck at ports and expected to accelerate the supply drop in February.

Among countries showing lower compliance, Iraq reduced output in January but pumped more than its target, as did Nigeria and Algeria. Gabon kept output steady.

The Reuters survey aims to track supply to the market and is based on shipping data provided by external sources, Refinitiv Eikon flows data and information provided by sources at oil companies, OPEC and consulting firms.