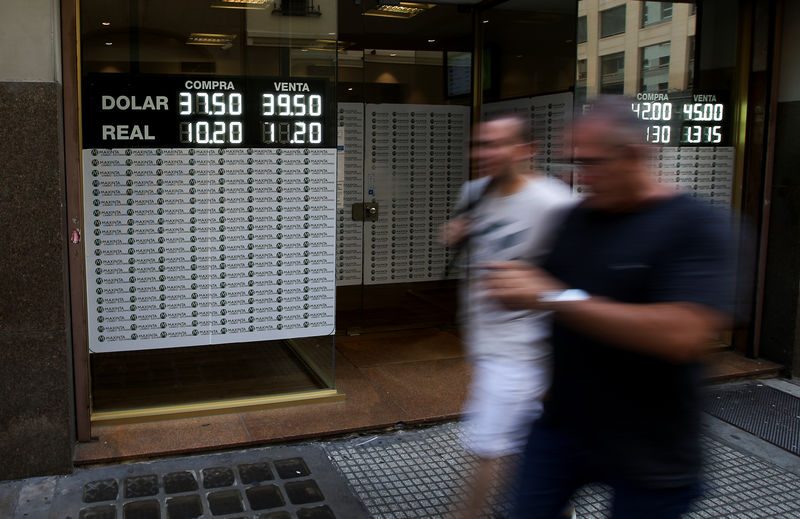 By Walter Bianchi and Adam Jourdan

BUENOS AIRES (Reuters) – Argentina’s central bank, looking to rein in a stronger peso, has snapped up close to 1 billion U.S. dollars in the last month, helping trim back sky-high interest rates and top up dollar reserves that could combat economic and political uncertainty as an election fight starts to brew.

The bank has bought $978 million since first intervening in the market last month to keep the peso within a trading band agreed with the International Monetary Fund, though it paused its buying late last week as the currency weakened.

Indeed, the currency fell 1.25 percent on Tuesday to 39.29 per U.S. dollar, its weakest close since early October.

Argentina spent many billions of dollars last year propping up the peso, which lost half of its value against the dollar as Argentina was battered by what President Mauricio Macri described as “storms.”

After a calmer start to 2019, analysts and investors fear these uncertainties could revive, hitting the peso, as political opponents begin to mount a challenge to the center-right Macri ahead of national elections in October.

The stronger peso, which has regularly pushed outside the agreed trading band this year, has given the bank an unexpected opportunity, letting it dip into the market and stock up on dollars, in the process weakening the currency back on track.

The trading band, which came into effect in October as part of a $56.3 billion deal Macri agreed with the IMF, was meant to curb central bank intervention unless there was “extreme overshooting of the exchange rate.”

The dollar buying spree could come in handy as Macri now battles to revive the economy ahead of elections, where he is facing a challenge from left-leaning former President Cristina Fernandez de Kirchner.

“The recent buying by the central bank has been an opportunity to increase the reserves and could help as more people convert to dollars as the elections get closer,” said Christian Reos, research head at Allaria Ledesma.

Most analysts expect the peso to lose strength ahead of the elections, as people trade their pesos for the safety of the dollar and uncertainties rise over the country’s political future in general.

Macri’s rivals are likely to take a different tack on the economy and may look to renegotiate the IMF deal.

If the peso weakens, dollar reserves would help to prop the currency up. The peso has started to weaken this month and hit a near three-month low against the dollar on Monday.

The central bank needs to bring down rates to lure businesses to take out more loans and help revive a stalled economy because many companies cut back on spending after Argentina, Latin America’s third-largest economy, dipped into recession last year.

“(Lowering the rates) could help give some air to the beleaguered economy,” said Ber.