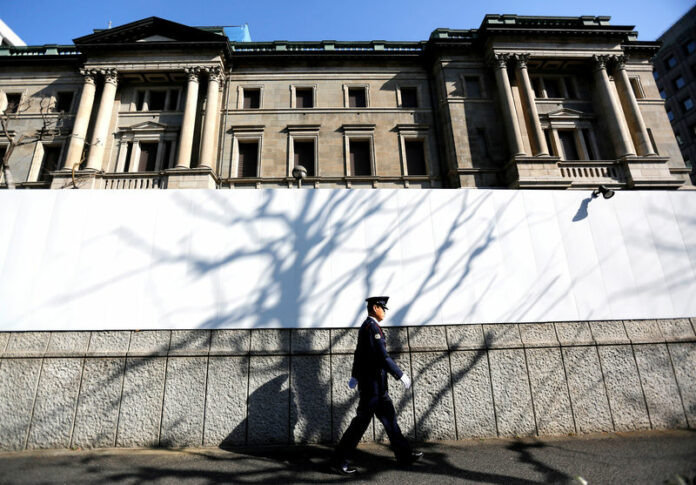 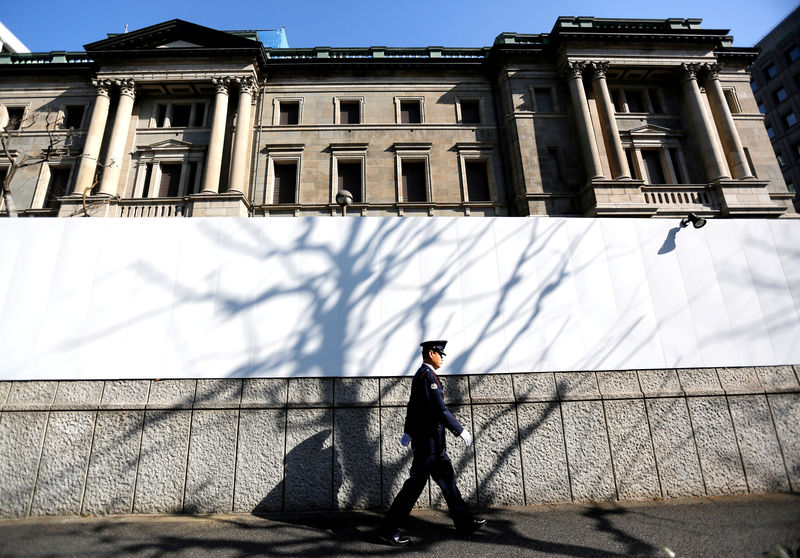 © Reuters. FILE PHOTO: A security guard walks past in front of the Bank of Japan headquarters in Tokyo

By Leika Kihara and Kaori Kaneko

TOKYO (Reuters) – The Bank of Japan can abandon its 2 percent inflation target or suspend efforts to achieve it once the job market is tight enough because the public is better off having prices fall, not rise, an economic adviser to Prime Minister Shinzo Abe said.

While inflation is stuck near 1 percent, the BOJ’s ultra-loose monetary policy is going well as it created jobs and boosted wages for temporary workers, said Koichi Hamada, who is considered as among the key architects of the premier’s “Abenomics” stimulus policies.

“Prices don’t need to rise much. From the perspective of people’s livelihood, what’s more desirable is for prices to fall, not rise,” Hamada told Reuters on Friday.

On the BOJ’s elusive 2 percent inflation target, Hamada said “I think it can be abandoned. It isn’t absolutely crucial.” He added that the “appropriate target level of inflation can be decided by the central bank”.

The remarks highlight the shift in public sentiment toward the BOJ’s radical monetary experiment begun by Governor Haruhiko Kuroda in 2013 as among the three pillars of Abenomics.

At the start, Kuroda pledged to achieve 2 percent inflation in roughly two years with a huge dose of monetary stimulus to end two decades of grinding deflation and economic stagnation.

While the economy recovered and the jobless rate slid near full employment, years of heavy money printing have failed to fire up inflation as firms remain wary of raising wages.

Hamada, who meets Abe regularly, had told Reuters in late 2012 that it was desirable for the BOJ to target 2 to 3 percent inflation, and deploy unlimited monetary easing.

In Friday’s interview, Hamada said the BOJ could suspend efforts to hit its price goal once the job market is tight enough, as the inflation target is useful “only as a tool for achieving full employment”.

The BOJ, however, did not need to abandon its 2 percent inflation target right now, as that could serve as a “safety valve” for when the job market deteriorates again or a sharp yen rise threatens Japan’s export-reliant economy, he said.

“Since the world economy faces substantial turbulence, the BOJ can wait (in changing) its policy stance,” said Hamada, professor emeritus of Yale University.

Hamada said the BOJ did not need to ramp up stimulus either, because the labor market was tightening.

“Demand is exceeding supply now. As long as this trend continues, we don’t need to worry too much,” he said.

On whether Abe should proceed with a scheduled sales tax hike in October to 10 percent from 8 percent, Hamada said there was little reason to put off raising the tax with the job market in good shape.

“If Japan cannot raise the sales tax when the job market is as favorable as now, it’s hard to see when it can ever raise the tax,” he said.

The BOJ faces a dilemma. Years of heavy money printing have dried up market liquidity and hurt commercial banks’ profits, stoking concern over the rising risks of prolonged easing.

But subdued inflation has left the BOJ well behind its U.S. and European counterparts in dialing back crisis-mode policies. Annual core consumer inflation was 0.8 percent in January.

Critics of Kuroda’s monetary experiment have urged the BOJ to ditch its 2 percent inflation target, or make it a longer-term goal with room for some allowances, so it can adjust policy more flexibly to address the costs of prolonged easing.

Kuroda has shunned such calls, taking the view that targeting inflation at 2 percent was a standard among central banks globally.