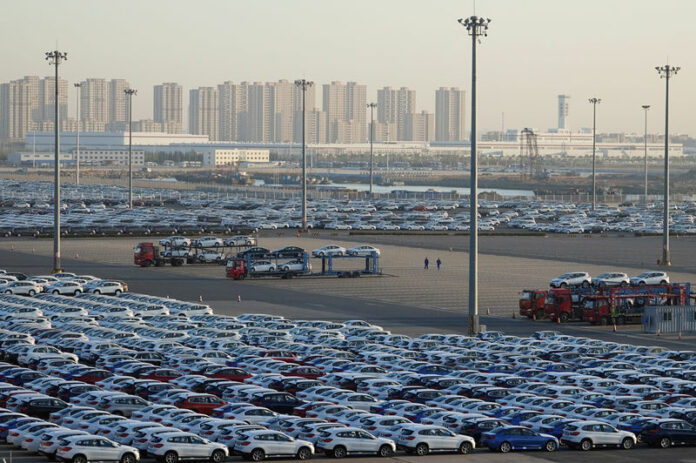 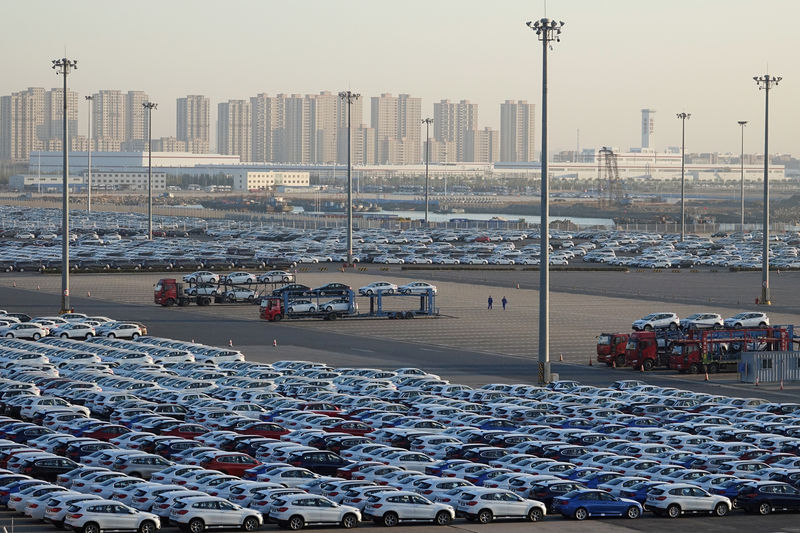 © Reuters. FILE PHOTO: Newly manufactured cars are seen at the automobile terminal in the port of Dalian, Liaoning

By Muyu Xu and Dominique Patton

Hot-rolled coil (HRC), steel that is heat processed into metal sheets used for car bodies and household appliances, was a steady profit driver for mills but orders are now slowing down, two major steel mills and several traders told Reuters.

Sliding demand for hot-rolled coil is a further barometer of China’s lagging industrial sector which is struggling with lower profits amid a trade war with the United States. Weakening steel end-user demand will add to the government’s concerns about job layoffs as Chinese economic growth was at its slowest in 28 years in 2018.

The slowdown, occurring as overall steel profit margins have dropped 60 percent in the past three months, threatens to push China’s entire embattled steel sector further into debt, forcing mills to cut costs and leaving them unable to upgrade products and processes, said analysts and mill executives.

“We may have to lay off 10 percent of our workers this year,” said a manager at a medium-sized steel mill in Hebei, China’s biggest steelmaking province, with 10,000 staff.

He declined to be identified due to company policy.

HRC accounts for about half of China’s total steel output, up from roughly one-third in the early 2000s, after mills upgraded product lines to comply with Beijing’s goal of expanding the higher value products made by its heavy industry.

Profit margins for HRC shot to more than 1,100 yuan ($164.37) per tonne in 2018 as benchmark futures prices pushed beyond 4,000 yuan a tonne to record highs. That prompted mills to expand their capacity even further, and 20 million tonnes per year of new HRC lines are set to start up this year.

But that expansion now looks out of synch with China’s sputtering economic engine. Annual automobile sales in China for 2018 contracted for the first time in more than 20 years. The sector uses almost 30 percent of the country’s hot-rolled coil and products derived from it.

HRC futures fell about 25 percent after reaching a record in August 2018 to about 3,000 yuan per tonne, pushing margins into the red for the first time since 2015.

“The hot-rolled coil market will see oversupply this year. On the one hand mills are expanding their output, meanwhile demand for HRC is weakening,” said Li Xinchuang, president of the China Metallurgical Industry Planning and Research Institute, a government think-tank. “Lots of manufacturing plants who actually use HRC have moved outside China.”

With the additional hot-rolled coil capacity, higher raw material costs and flat demand, profit margins for the HRC sector as a percentage of earnings before interest, taxes and depreciation (EBITDA) are set to slump to 6 percent this year, down from an EBITDA margin of 15 percent in 2018, said Kevin Bai, an analyst at CRU in Beijing.

Hot-rolled coil prices are now trading at a rare discount to steel rebar, reflecting market expectations that demand of the metal used to reinforce concrete and in construction will rise because of stimulus spending by Beijing.

The flat demand for higher value capital goods like cars and washing machines has meant HRC spot orders are falling and there are risks for long-term contracts, said a sales manager at a small-sized mill in Hebei.

“We don’t even know if the long-term contracts can be maintained in the second half of this year. There are too many uncertainties,” he said.

Beijing has promised subsidies to boost sales of some vehicles and analysts expect demand to gradually pick up from the second quarter. But even then, government and industry forecasts say that demand growth will be at most 2 percent in 2019.

“It’s particularly demand from the inland small cities that is weak. The competition between mid- and low-end models will become more intense and small-scale automakers may be wiped out,” said Yale Zhang, the head of Shanghai-based consultancy Automotive Foresight.

That is set to hurt the lower capacity steel mills that tend to supply the smaller car makers.

Longer-term, the outlook remains bleak for HRC products for cars. Under pressure to lower emissions, car companies are expected to increasingly switch to aluminum to make lighter vehicles that consume less fuel.

While the higher cost of aluminum will be a deterrent for many firms, Beijing is targeting a reduction in average vehicle weight of between 5 percent and 20 percent by 2020, recommending instead the greater use of high-strength steel, aluminum-magnesium alloy, and other composite materials.

“It’s hard to see another industry filling the gap left by autos,” said a senior official surnamed Zhang at a major steel trading house in the eastern province of Zhejiang.