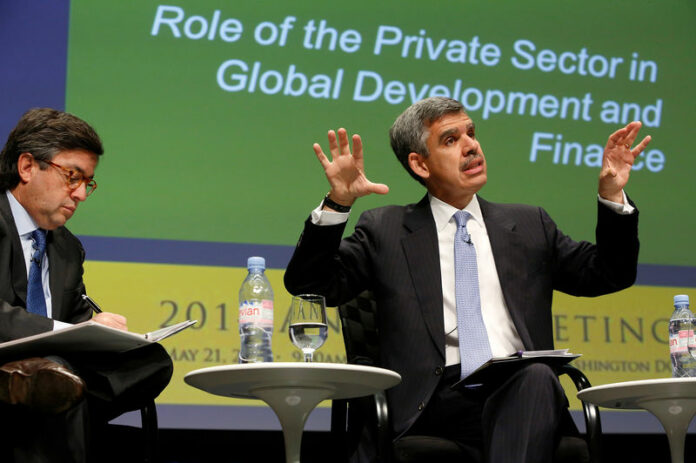 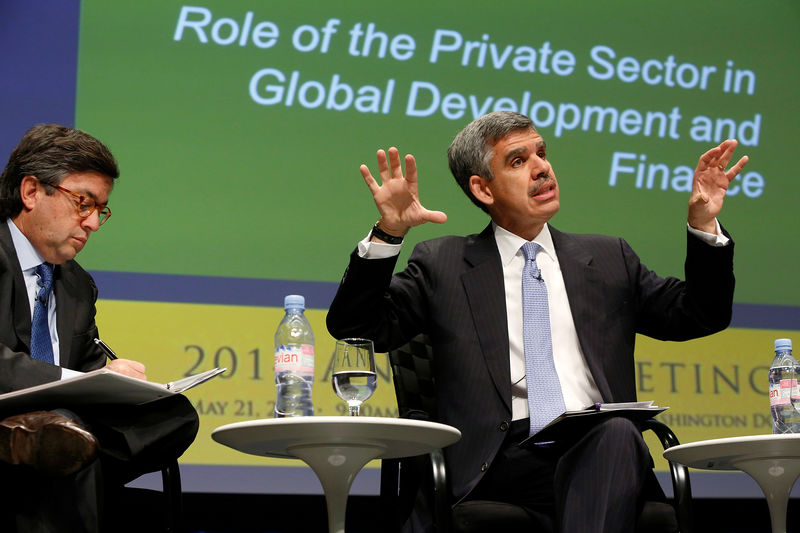 © Reuters. FILE PHOTO: Moreno and El-Erian discuss the role of the private sector in global development during the Bretton Woods Committee annual meeting at World Bank headquarters in Washington

By Trevor Hunnicutt and Jennifer Ablan

NEW YORK (Reuters) – The European economy is cooling more than many investors believe, Mohamed El-Erian, chief economic adviser for Allianz (DE:) SE, said on Monday, warning that the slowdown poses the biggest risk to the market.

In addition, El-Erian, in an interview with Reuters, said that the European Central Bank has only limited tools at its disposal to respond to economic weakness while European governments are not prepared to respond with spending.

“People are underestimating how quickly Europe is slowing,” El-Erian said.

The International Monetary Fund revised down its forecast for euro zone growth to 1.6 percent in January from 1.9 percent three months prior, but El-Erian thinks even the lowered outlook is overly optimistic. El-Erian, the former chief executive of Pimco, the bond investment giant owned by Allianz, expects the euro zone will struggle to deliver even 1 percent growth in gross domestic product this year.

The potential spillover effects from a cooling in Europe and China helped push the U.S. Federal Reserve to signal in January that its interest rate hikes are on hold for the time being, saying that it would be “patient” before making any moves, after raising rates four times in 2018.

But El-Erian, a long-time central bank observer, said a strong U.S. economy may force the Fed to shift its message as soon as by summertime. Allianz managed 1.4 trillion euros in assets at the end of 2018.

“There’s a real chance that the Fed may have to change signals again from patient on rates,” he said. “The domestic economy does not justify patience and flexibility. The domestic economy justifies a continued normalization of monetary policy because the labor markets remain strong, because wages are increasing at 3 percent and because business investment is picking up.”

But although there are real risks from in Europe and China, El-Erian said the extent that the market is pricing in the chance of a Fed rate cut is overdone.

“I suspect that, with continued solid U.S. economic performance, the Fed will be forced to give a more nuanced message about the rates outlook which may in fact conflict with what’s priced by markets currently,” he said.

The market is now pricing in a higher chance of a cut to the Fed’s benchmark federal funds rate by January 2020 than for a rise from the current 2.25 to 2.50 percent target.

The Fed will have to signal the possibility of further rate hikes or a longer period of letting its massive bond holdings fall by summertime, El-Erian said.

Despite El-Erian’s optimism on the U.S. economy, he said some stock and bond market prices may have gotten too high. He said he has little conviction that stocks will rise strongly from this point and said it is unlikely that U.S. 10-year Treasury yields move much lower unless barely positive 10-year German bonds fall, too.

“I don’t believe this is the time for massive risk-on,” El-Erian said, adding that said he favors fixed-income securities within the three-to-four-year range. In looking at Europe, he said that five of the region’s biggest markets – Britain, Germany, France, Spain and Italy – are dealing with internal and continent-wide disagreements from Brexit to fiscal spending that are toxic for growth.

“This team – it wants to play at the highest level, but its five most powerful players are all playing below potential,” El-Erian said.

The concern is that central banks are becoming less effective with rates negative in Europe and less appetite for other stimulus policies, from government spending to central banks’ buying assets.

“Central banks realize that the additional round of unconventional policies mean lower benefits, higher costs and risks, so they really want to normalize,” he said. But they may struggle with European governments unable to ramp up spending.

The European Central Bank, which just ended a 2.6 trillion-euro bond-buying program aimed at pushing down borrowing costs, is already contemplating new support measures, with the first possibly coming at its next policy meeting, on Thursday.