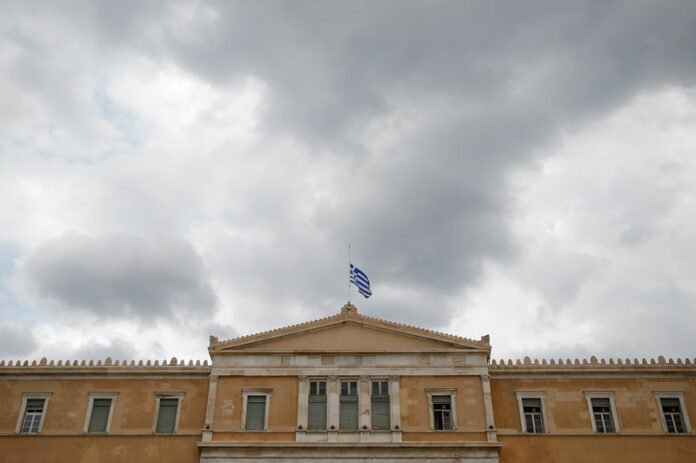 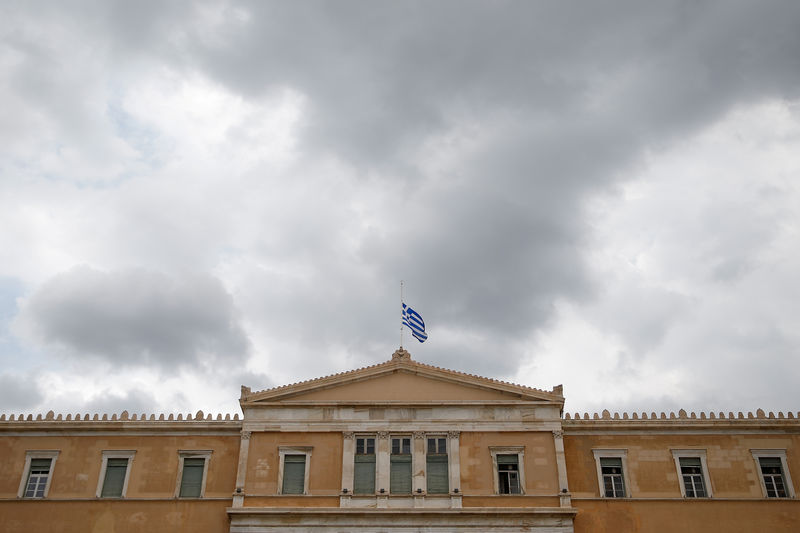 © Reuters. A Greek national flag flies at half mast over the parliament building as a period of national mourning is declared for the victims of wildfires, in Athens

By Lefteris Papadimas and Abhinav Ramnarayan

ATHENS/LONDON (Reuters) – Greece drew strong demand on Tuesday for its first 10-year bond issue since plunging into a debt crisis nine years ago, in a clear endorsement by markets of its economic revival days after securing a two-notch ratings upgrade.

It raised 2.5 billion euros ($2.83 billion) from a sale that drew offers worth 11.8 billion euros, it said in a regulatory filing.

The yield was set at 3.90 pct, a slim premium judged by the secondary yields of outstanding Greek bonds and down from initial guidance of 4.125 percent. The coupon was 3.875 percent.

Greece emerged from its third international bailout six months ago, after nearly a decade of economic austerity and reforms implemented under tight supervision by its foreign creditors.

“This issue is a testimony to how far they have come,” said Rabbani Wahhab, senior fixed income fund manager at London and Capital, urging Greece to stay the path of reforms and fiscal prudence.

The country aims to raise up to 7 billion euros in total from debt markets this year.

It had already pocketed 2.5 billion euros from a five-year bond in January, and was encouraged to tap the market again over a longer maturity after Moody’s upgraded its rating on Greece by two notches last week, sending yields on existing debt to a 12-year low.

The yield on the Greek benchmark maturing in January 2028 stood at 3.688 percent on Tuesday afternoon.

Greece can stay afloat without recourse to markets up to 2021 thanks to a 27-billion euro cash buffer it has built with unused loans and money raised from markets.

But it still needs to show it can refinance itself from bond markets alone, without external support.

“Demand is impressive already,” he told lawmakers before books closed. “It’s a decisive sign that we are turning a page, emerging from the crisis period, that things can improve.”

As part of its post-bailout economic transition, Athens has agreed to achieve a 3.5-percent-of-GDP primary budget surplus – which excludes debt servicing costs – up to 2021.

But investors will be closely watching for any signs of backtracking on its reform commitments or fiscal slippage in the run-up to the election.