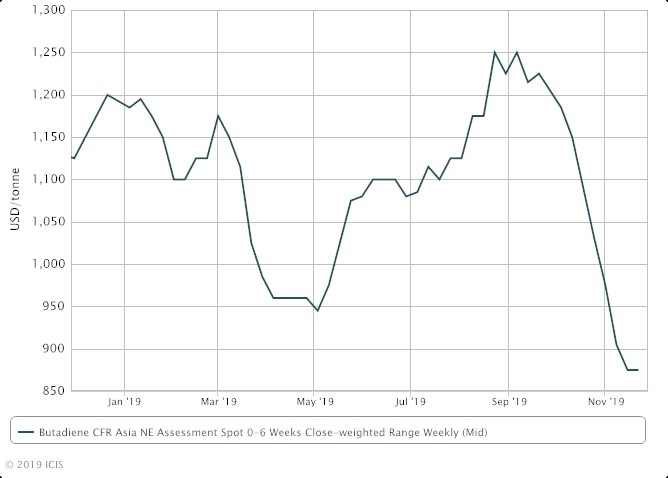 SINGAPORE (ICIS)–Deep-sea butadiene (BD) supply to Asia will dwindle following explosions that hit a major US plant, with shipments to the region in December likely to be affected.

More than 10,000 tonnes of US cargoes expected to head to Asia in two separate vessels in December were supposed to come from TPC Group’s BD plant that was hit by the blasts, market sources said.

The plant has two lines with a combined capacity of 426,000 tonnes/year, according to ICIS data.

“TPC has a massive BD capacity, and with the declaration of a force majeure, the BD plant may likely be down for a long time,” a trader said.

Spot discussions for January-arrival cargoes in Asia may be affected, but any impact for December would be limited, another trader said.

“BD capacity is long in [the] US, so I expect there should not be significant impact in middle term,” he said.

An influx of deep-sea cargoes from Europe and the US in recent months, along with weak demand, has been depressing BD prices in Asia.

Poor demand prevails in the downstream synthetic rubber (SR) and acrylonitrile butadiene styrene (ABS) markets amid uncertainties on whether a deal will be signed between the US and China to resolve their 16-month long trade war.