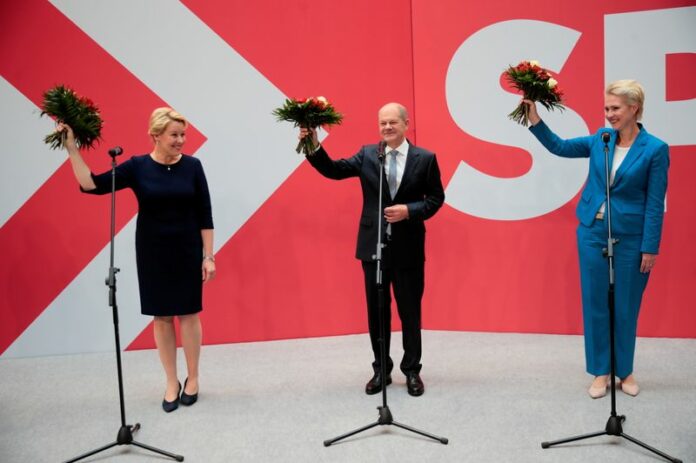 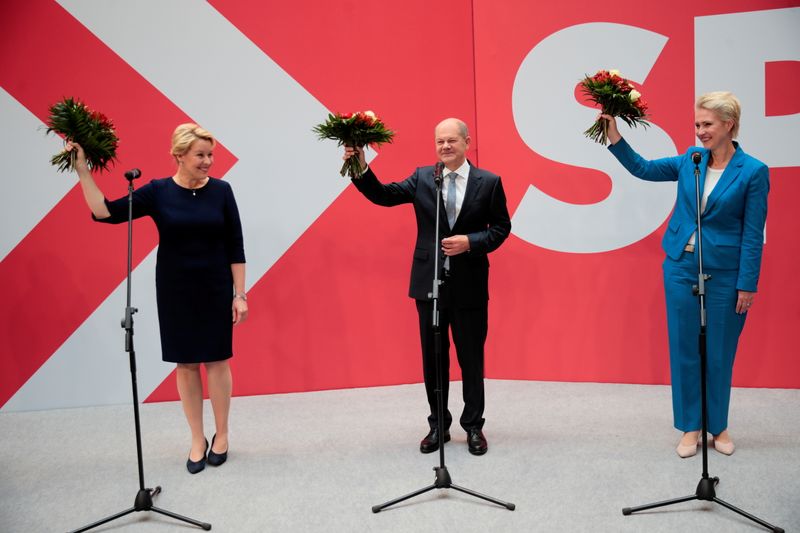 By Yoruk Bahceli and Dhara Ranasinghe

(Reuters) -The purse strings have been loosened and will stay that way, no matter who heads Germany’s new government. That’s the verdict from investors who see potential gains for segments such as green finance alongside modestly higher bond yields.

Based on the colours of the parties involved, a potential Social Democrat-led alliance has been dubbed the ‘traffic light’ coalition, with a conservative-led one named after the flag of Jamaica.

And for investors following the negotiations, that may be the main difference between the two groupings. Apart from the FDP which wants a speedy return to the debt “brake” capping new federal borrowing, all the other parties have expressed some willingness to spend more flexibly.

“It seems that the Greens are going to be part of the coalition … So whether it’s a Jamaica or a traffic light coalition, that means more expansionary fiscal policy,” said Anna Stupnytska, global macro economist at Fidelity International.

She saw the ‘traffic light’ option of the Social Democrats, Greens and the FDP as the most positive option for markets and “a real change from politics of the past several decades”.

Higher spending from this coalition is expected to provide a bigger boost to public investments, supporting economic growth.

The CDU has led Germany since 2005, a period characterised initially by stringent austerity both at home and across the euro zone, which critics say has depressed public investments. But the COVID-19 pandemic hitting in March 2020 gave way to greater spending.

Given the Greens will be key in either coalition, Kruse is particularly seeking opportunities in companies that benefit from a speedier green transition.

“In general, there will be a lot of spending,” he said.

THE FUTURE IS GREEN

There are some differences between the parties that must be resolved, particularly for the Greens and the FDP, who will hold talks seeking compromise before negotiations with the other parties.

The Greens’ have pledged to “reform” the debt brake and, like the SPD, favour higher taxes on the wealthy. The CDU has pledged not to raise income taxes and seeks cuts for companies while the FDP advocates tax cuts for wealthy individuals and companies.

There could also be sticking points over housing reform and the pace of the transition towards decarbonisation.

“The outcome of the negotiations is likely to lead to movements in utilities and property shares,” said Marco Willner, head of investment strategy at NN (NASDAQ:NNBR) Investment Partners.

The spending increases are unlikely to play out too hard in bond markets, investors reckon, given the backstop from the European Central Bank. While yields have risen in recent weeks as the SPD cemented its lead, this is also down to inflation data and jitters over monetary policy, analysts noted.

Prospects for increased German spending come as European Union budget rules are under review ahead of their reinstatement in 2023 — a focus for those invested in heavily-indebted Southern European bonds.

The FDP and CDU want to return to strict EU budget rules, while the SPD also favours preserving them as they are flexible enough to tackle future crises. Still, an SPD/Green-led coalition “will exert less pressure on EU countries to lower their budget deficits quickly,” SEB economists said.

Finally, German voters’ rejection of the Left Party as well as the far-right AfD is seen as a good sign for Europe, with French presidential elections due next year.

“Whatever the coalition will be, it will be euro-friendly and what’s important is that Germany will remain a reliable partner for Europe,” said Hans-Joerg Naumer, senior investment strategist at Allianz (DE:ALVG) Global Investors.