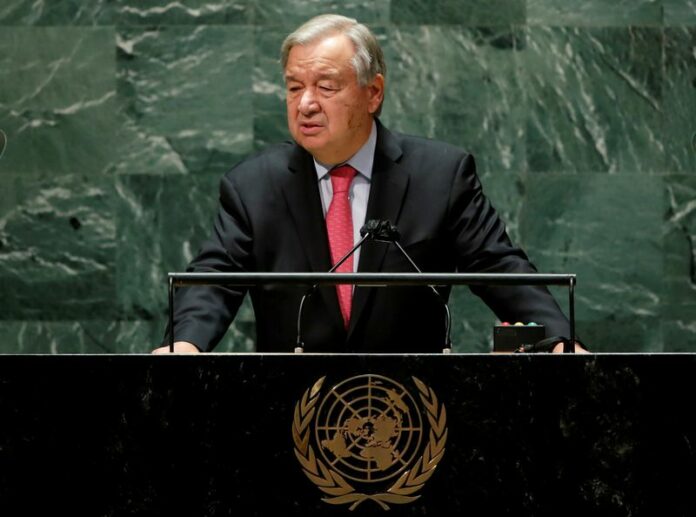 GENEVA (Reuters) – U.N. Secretary-General Antonio Guterres has written to world leaders calling on them to clinch a deal on curbing fisheries subsidies as negotiations near their final phase at the World Trade Organization in Geneva, a document showed.

However, in a sign of the challenges, the head of the talks had to delay what was meant to be a series of daily meetings starting this week to finalise the wording of a draft agreement because of outstanding “macro” differences between members, a WTO spokesperson confirmed.

In the letter dated Sept. 29, Guterres called on world leaders “to join me in pushing for agreement at WTO to end harmful fisheries subsidies before the end of this year” in a rare intervention of the U.N. chief in WTO matters.

The WTO talks on ending harmful subsidies worth billions of dollars began 20 years ago and are now at the most advanced stage, with a deal seen as critical to confirming the relevance of the troubled body.

The talks, which environmentalists see as the biggest hope for reversing declining fish stocks, were given a boost in 2015 when U.N. members made a ban part of their Sustainable Development Goals.

WTO Director-General Ngozi Okonjo-Iweala, who began in March, is hoping to finalise a deal at a major ministerial conference at the Geneva headquarters beginning next month.

One of the most challenging aspects of the negotiations is the question of exemptions for WTO members with developing country status, some of which are major subsidisers like China.

“There are some very, very tough issues that need to be addressed … the discussions on exemptions, the going is very tough,” WTO spokesperson Keith Rockwell said this month.

Santiago Wills, who is chairing the talks, has sought to find compromise proposals in his draft text. However, a confidential text submitted by India on Sept. 23 and seen by Reuters countered his proposals with additional carve-outs for developing countries, namely by giving up to 25 years for them to comply with some provisions.

That prompted criticism from several wealthy countries, with one delegation stating that the talks appeared to be “going backwards,” according to trade sources.