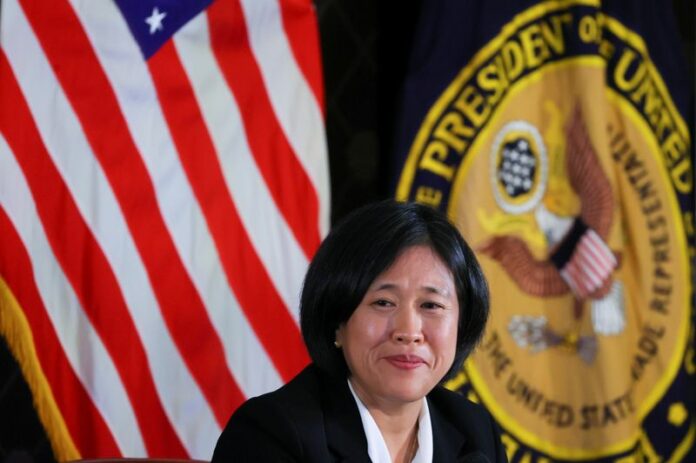 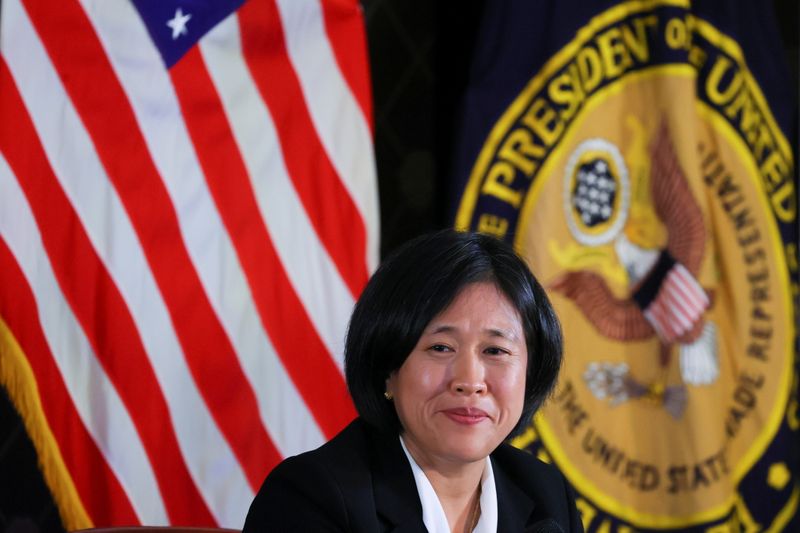 © Reuters. U.S. Trade Representative Katherine Tai addresses the Geneva Graduate Institute on the role of the World Trade Organization (WTO) in the global economy and U.S. policy priorities ahead of the 12th Ministerial Conference in Geneva, Switzerland October 14,

BRUSSELS (Reuters) -Top U.S. trade negotiator Katherine Tai said on Thursday she was optimistic about resolving a dispute with the European Union over steel and aluminium tariffs, insisting that joint transatlantic efforts were needed to combat overcapacity in the global market.

Former U.S. President Donald Trump imposed tariffs of 25% on steel and 10% on aluminium from the European Union, along with other economies such as China, India, Russia and Switzerland.

The European Commission, which oversees EU trade policy, has agreed to suspend a planned increase in retaliatory duties until Dec. 1 and launch formal talks on addressing excess global capacity largely centred in China.

Tai also met with top officials from the European Steel Association, or EUROFER, on Thursday, and said the industry group could play an important role in helping broker a deal.

“Ambassador Tai stressed the need to make rapid progress to reach a consensus to preserve our critical industries and meet the economic and environmental goals shared by the United States and European Union,” USTR said in a statement after the talks.

She told the group the U.S. proposal would ensure the long-term viability of the U.S. and European steel and aluminum industries, while strengthening the transatlantic relationship.

A U.S. steel industry source told Reuters last week that a likely agreement would replace the Section 232 tariffs with an arrangement allowing duty-free entry of a specified quota of EU steel, with tariffs applied to higher volumes. The two sides differ on how high to set the quota.

However, Tai said the negotiations were not so one-dimensional.

“I don’t want you to think that essentially this is an exercise at a Turkish bazaar where we’re negotiating the price for carpet. … This is actually a more multifaceted negotiation,” she said.

Tai said the United States and the European Union should “link arms” to address overcapacity.

“If we can take steps together, if we can commit to collaborating, then we can modify this tension between us so that we can be a more powerful force and push back on a common challenge,” she said.