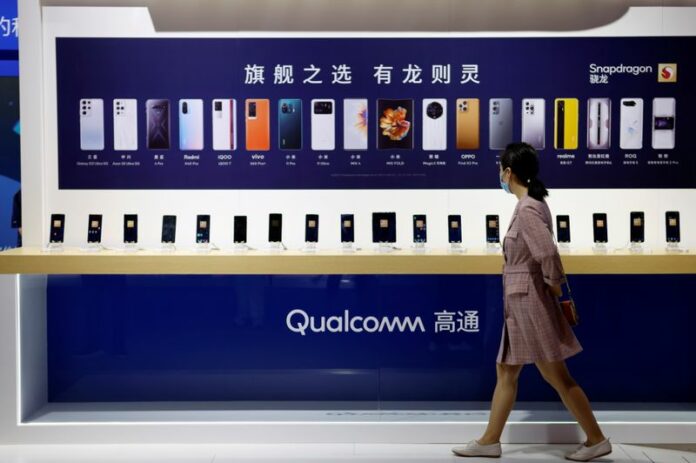 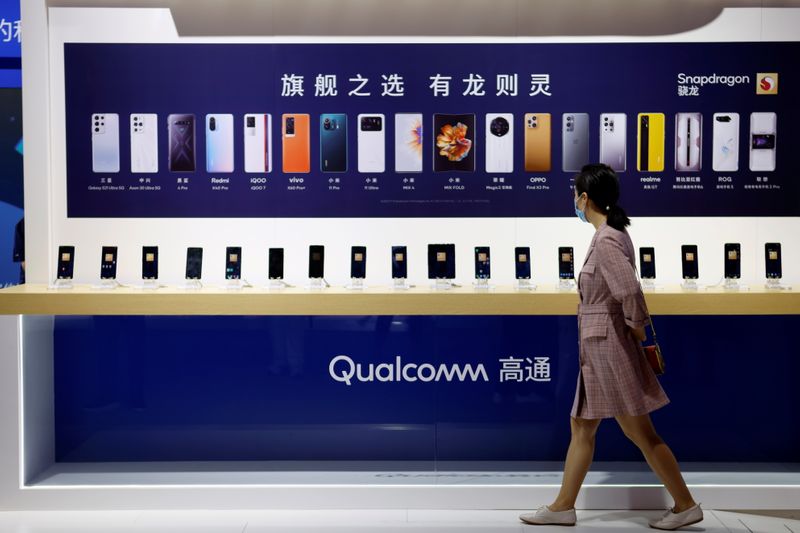 © Reuters. FILE PHOTO: A woman walks past a counter displaying mobile phones at the Qualcomm booth during the 2021 China International Fair for Trade in Services (CIFTIS) in Beijing, China September 4, 2021. REUTERS/Florence Lo

(Reuters) -Qualcomm Inc said on Tuesday it expects chip sales to Apple Inc (NASDAQ:AAPL) to dwindle to a trickle in the coming years but predicted brisk growth in chips for autonomous cars and other connected devices, sending shares up 7.9% to a record high close of $181.81.

Qualcomm (NASDAQ:QCOM) currently supplies all of the modem chips that connect Apple’s devices to mobile data networks, but Apple is working on its own modem chips.

At an investor conference in New York, Qualcomm executives said they expect to supply only 20% of Apple’s modem chips by the launch of the iPhone in 2023. Qualcomm Chief Financial Officer Akash Palkhiwala expects Apple to make up a “low single-digit” percentage of the company’s chip sales by the end of fiscal 2024.

But Apple losses will be more than offset by gains in other fields, Qualcomm executives said.

Qualcomm expects revenue from the automotive sector, where sales were just under $1 billion in fiscal 2021, to reach $3.5 billion in five years and $8 billion in 10 years. Earlier on Tuesday, Qualcomm landed a deal to sell self-driving car chips to German automaker BMW.

Qualcomm executives said that Apple had fostered a market for devices such as smart watches and premium wireless headphones.

While Apple self-supplies chips for those devices, Qualcomm said it aims to supply chips for everyone else. The company said it expects $9 billion in revenue from its internet of things unit that supplies such devices, an 80% increase from the $5 billion for the unit in fiscal 2021. Growth in that segment will also come from virtual reality headsets such as Meta Platforms Inc’s Oculus Quest 2, which uses a Qualcomm chip and which has now sold 10 million units, executives said, referring to third-party estimates.

“We’re no longer defined by a single end market and a single customer relationship,” Chief Executive Cristiano Amon said during the event.

Amon also said that Qualcomm sells Apple what are called radio-frequency front-end chips that are paired with modem chips. Amon said Qualcomm will have a future chance to compete to sell those chips to Apple regardless of where Apple sources its modem chips.

Qualcomm executives said those potential wins are not included in Qualcomm’s forecasts and that they expect phone chip revenue to grow in line with global markets thanks to strong demand from Android device makers.

Equity Futures: Sustenance above 18000 crucial for Nifty 50 ahead