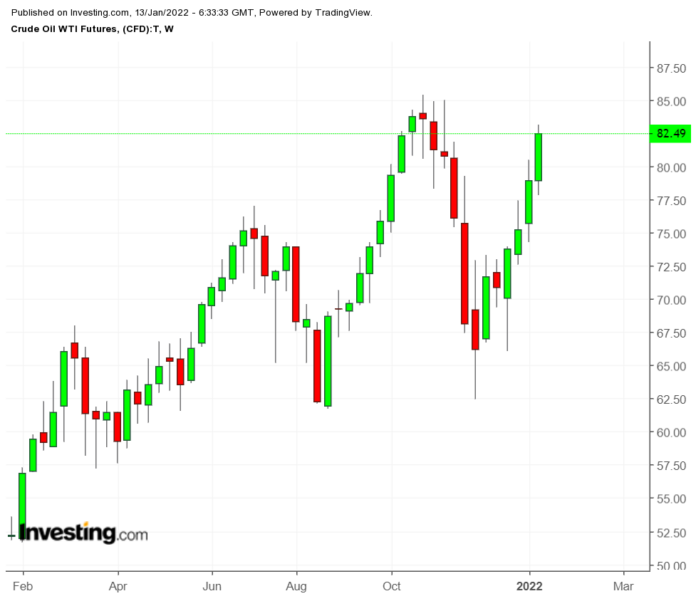 Oil prices climbed over the last week to highs not seen in two months. On Wednesday, Brent crude oil hit $84 per barrel and WTI climbed to nearly $82 per barrel. Here are some factors driving this rally and a look ahead at what might move prices in the near term.

The Labor Department revealed this week that the rate of inflation in the U.S. hit 7% in December. U.S. CPI has been rising above the 6% level for three consecutive months, making this the fastest inflation has grown since 1982.

As this column has previously discussed, inflation acts as an upward force on oil prices. Although the Federal Reserve has admitted that interest rate hikes and tighter monetary policies are needed to curb inflation, it is unlikely that any monetary policy changes will be made before March at the earliest.

Many believe that even when it does act, the Federal Reserve will not make the aggressive interest rate hikes needed to truly curb inflation. They believe the Fed is afraid of sending the economy into a recession.

Comments by Fed Chairman Jerome Powell on Wednesday helped fuel rising oil prices when he said that interest rate hikes would not come at the expense of economic growth. Analysts took this to mean that demand for oil will remain strong, but inflation was likely to continue to act on oil prices.

OPEC+ has maintained its commitment to raising its oil production quotas by 400,000 bpd each month. However, tracking by outside sources divulged that the group is not, in fact, adding that much oil to the market each month.

A recent survey from Platts revealed that in December, OPEC+ only increased production by 310,000 bpd. Fourteen out of the 18 members that have quotas (Iran, Venezuela, and Libya are exempt) did not meet their numbers in December. OPEC+ is supposed to increase production by another 400,000 bpd in January and recently authorized a 400,000 bpd increase for February as well, but it is unclear whether the group can or will meet these output targets.

In December, the discovery of a new coronavirus variant, Omicron, caused oil prices to plunge as market watchers feared that renewed lockdowns and travel restrictions over the holiday season would hurt oil demand. Even though many areas are reporting high numbers of coronavirus cases, fears of travel restrictions seem to have receded.

As a result, there is a renewed expectation that oil demand will be strong. This is helping push prices higher, although the data on whether consumption is still impacted by Omicron fears remains forthcoming.

Political unrest in Kazakhstan, which produces 1.68 million bpd, caused a brief interruption in oil supplies from one field earlier this week. Oil prices were buoyed this week by news of, and uncertainty surrounding, the political and social unrest, although we can expect this sentiment to likely dissipate if Kazakhstan does not transform into a major international news story.

What to look for:

Will we see strong production growth from OPEC+ in January? All eyes will be on Russia, Saudi Arabia, the UAE, and Iraq to see how much these producers increase output. Producing to their full quotas could help curb prices even if Nigeria and Libya continue to fall short.

Traders should keep an eye on this, because depressed gasoline demand could show up in the form of gasoline builds in the EIA data later this month.

Diplomatic negotiations are ongoing between the U.S. and Iran and between the U.S. and Russia. Little progress has been made so far with Iran, but as President Biden’s approval rating continues to fall, it is possible that his administration may take a more conciliatory position towards Iran in order to secure a “foreign policy win” before the midterms.

This could include some sort of sanctions relief that would put more Iranian oil on the market. Talks began this week between the U.S. and Russia concerning Russia’s threats to Ukraine. Oil prices might move down or up depending on whether there is positive or negative news, and at the moment the talks do not appear promising.