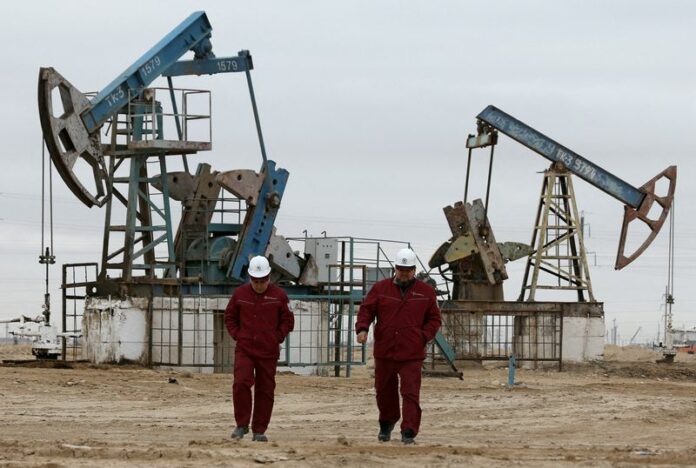 © Reuters. FILE PHOTO: Workers walk as oil pumps are seen in the background in the Uzen oil and gas field in the Mangistau Region of Kazakhstan November 13, 2021. REUTERS/Pavel Mikheyev

NEW DELHI -Oil prices slipped on Thursday amid thin trading volumes ahead of a public holiday, as traders weighed a larger-than-expected build in U.S. oil stocks against tightening global supply.

Both contracts on Wednesday had shrugged off a large build in U.S. crude inventories to end the trading session roughly 4% higher.

“Asian buyers have been absent today, with volumes potentially being curbed by the long weekend across most of Asia, Europe, and North America,” OANDA analyst Jeffrey Halley wrote in a note.

The International Energy Agency on Wednesday warned that from May onwards roughly 3 million barrels per day of Russian oil could be shut-in due to sanctions or voluntary embargoes.

At the same time, major global trading houses are also planning to curtail crude and fuel purchases from Russia’s state-controlled oil companies in May, Reuters reported on Wednesday.

The probability of a EU ban on Russian oil being agreed may be almost zero, but no one will be able or wanting to say that clearly, Vandana Hari, founder of oil market analysis provider Vanda (NASDAQ:VNDA) Insights said.

“And, even a continuing sabre-rattling will be enough to keep the risk premium alive.”

Despite signals that global supply disruption will persist, oil stocks in the U.S. rose by more than 9 million barrels last week, the U.S. Energy Information Administration said on Wednesday, driven in part by releases from the nation’s strategic reserves. Analysts in a Reuters poll had anticipated just an 863,000-barrel build.

“The fact that oil continued to rally after such a large jump in U.S. crude inventories and that China concerns have suddenly been forgotten, is a serious warning signal to those pricing in the top of oil markets,” OANDA’s Halley said.