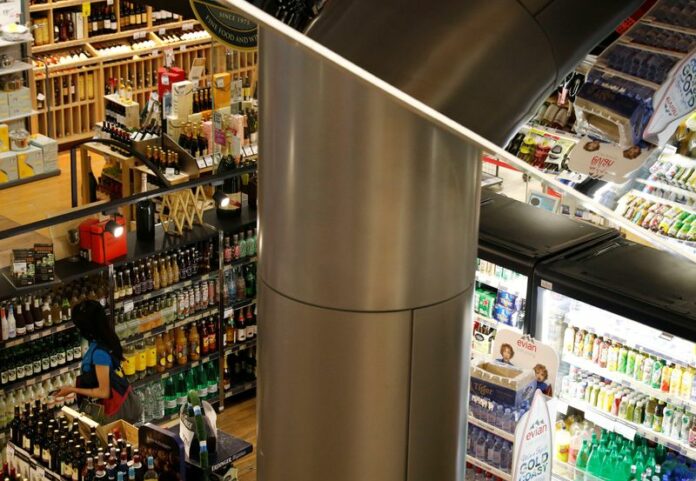 By Aradhana Aravindan and Anshuman Daga

SINGAPORE (Reuters) – Singapore’s central bank tightened its monetary policy on Thursday, saying the widely forecast move will slow inflation momentum as the city state ramps up its battle against soaring prices made worse by the Ukraine war and global supply snags.

The policy tightening, the third in the past six months, came as separate data showed Singapore’s economic momentum waning over the first quarter.

The local dollar jumped briefly after the Monetary Authority of Singapore (MAS) re-centred the mid-point of the exchange rate policy band known as the Nominal Effective Exchange Rate, or S$NEER, at its prevailing level. It also increased slightly the rate of appreciation of the policy band.

It was the first time in 12 years that the MAS used these two tools simultaneously to tighten policy, underlining policymakers’ worries about potential price instability which has seen the U.S. Federal Reserve set an aggressive path to tightening monetary conditions.

There was no change to the width of the MAS policy band.

“The war in Ukraine has driven global inflation forecasts higher and dented the outlook for growth,” MAS said in a statement.

“The fresh shocks to global commodity prices and supply chains are adding to domestic cost pressures,” it said, warning that inflation risks remain “elevated over the medium term.”

Singapore, a major travel and business hub, made its biggest reopening moves https://www.reuters.com/world/asia-pacific/singapore-relax-more-covid-curbs-including-overseas-arrivals-2022-03-24 from the COVID-19 pandemic through late March and early April, easing local restrictions and allowing vaccinated travellers from anywhere in the world to enter without having to quarantine.

“The door is definitely not closed yet,” said Selena Ling, head of treasury research and strategy at OCBC, referring to another potential tightening in October.

The MAS manages monetary policy through exchange rate settings, rather than interest rates, because trade flows dwarf its economy, letting the Singapore dollar rise or fall against the currencies of its main trading partners within an undisclosed band.

All 16 economists polled by Reuters expected the MAS to tighten but they were divided on which parameters it would change.

The Singapore dollar strengthened about 0.5% after the statement and hit a one-week high of S$1.3552 per dollar.

The central bank maintained its forecast for gross domestic product to expand 3% to 5% this year. The economy grew 7.6% in 2021, the fastest in a decade, recovering from a pandemic-induced 4.1% contraction the previous year.

Separate advance data on Thursday showed GDP grew 3.4% in January-March on a year-on-year basis, versus economists’ expectations of 3.8% growth, and slower than the 6.1% pace in the fourth quarter of 2021.

The MAS tightened monetary policy in January in an out-of-cycle move, which followed a tightening in October https://www.reuters.com/markets/currencies/singapores-central-bank-tightens-monetary-policy-inflation-risks-2022-01-25, joining many other global central banks, led by the Fed, to get on top of surging inflation.

Earlier on Thursday, South Korea’s central bank hiked rates to their highest since August 2019 in an unexpected move.

The Russia-Ukraine conflict has intensified pressure on consumer prices which were already rising rapidly due to coronavirus-driven supply snags. The Singapore government has said it stands ready https://www.reuters.com/world/asia-pacific/singapore-can-deploy-more-fiscal-monetary-policy-measures-if-needed-finmin-2022-03-22 to respond with fiscal and monetary measures if a deepening Ukraine crisis impacts growth and inflation.

MAS said it will remain vigilant to developments in the external environment and their impact on the Singapore economy.

“The MAS fully recognise that if inflation continues to surprise to the upside, there’s a possibility they have to do more at future policy meetings,” said Khoon Goh, head of Asia research, ANZ.