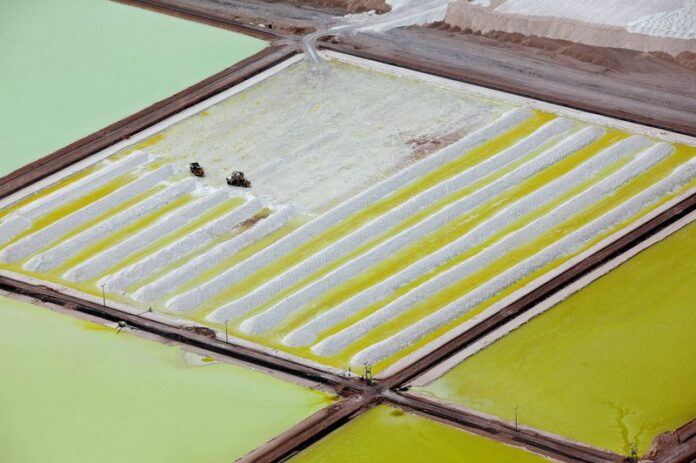 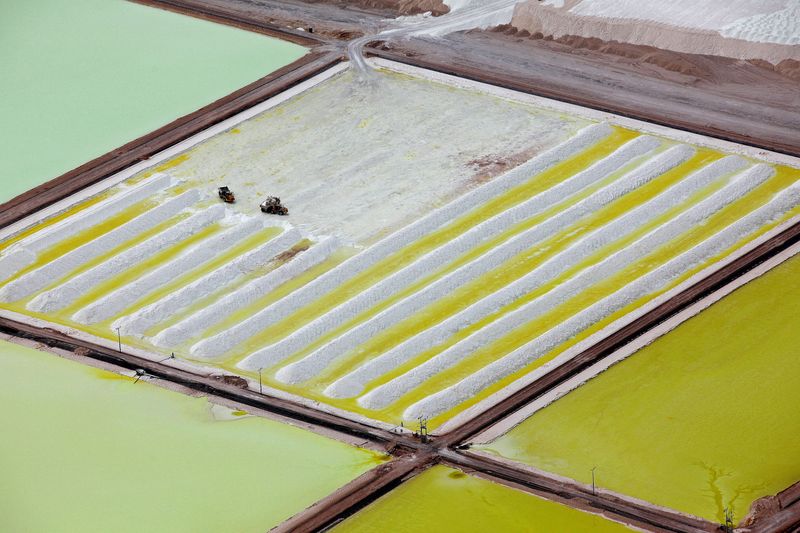 © Reuters. FILE PHOTO: An aerial view of the brine pools and processing areas of the Soquimich lithium mine on the Atacama salt flat, the largest lithium deposit currently in production, in the Atacama desert of northern Chile, January 10, 2013. REUTERS/Ivan Alvara

MEXICO CITY (Reuters) -Mexico is working with governments of Argentina, Bolivia and Chile to create a lithium association so the countries can share their expertise to exploit the battery mineral, Mexican President Andres Manuel Lopez Obrador said on Tuesday.

Bolivia, Chile and Argentina sit atop the so-called “lithium triangle,” a region containing nearly 56% of the world’s resources of the metal, according to the most recent figures from the United States Geological Survey (USGS).

Mexico has no commercial lithium production but boasts potential deposits that if proven economically viable, could catapult it to major producer status.

Last month, its Congress passed a bill to nationalize the metal, tightening control of strategic mineral resources, with Lopez Obrador saying he would review all contracts to exploit the metal.

Close to a dozen foreign companies in Mexico hold active mining concessions, including permission to prospect for lithium, including the country’s most advanced project Bacanora Lithium, which is controlled by Chinese firm Ganfeng Lithium Co.

A branch of the International Chamber of Commerce has argued that the law nationalizing the country’s future lithium industry violates trade obligations and could prove costly to the government if mining companies seek to recoup losses.

The metal is going through a price boom since the start of last year amid a global push toward electric modes of transportation, driving huge demand from carmakers and battery firms to shore up supply.

“Chile already participates in Latin American initiatives for cooperation in the exchange of knowledge, experiences, science and technology, and in this sense, we are willing to participate in initiatives that bring our peoples closer together,” Chilean Mining Minister Marcela Hernando told Reuters.

Chile has the third largest lithium reserves globally and is the second biggest producer, while neighboring Bolivia has hardly any production despite having larger resources than any other country, according to USGS data.

For its part Argentina holds the spot of fourth top producer of lithium worldwide and is looking to speed up development, held back for years by red tape, high tax rates, rampant inflation and currency controls.