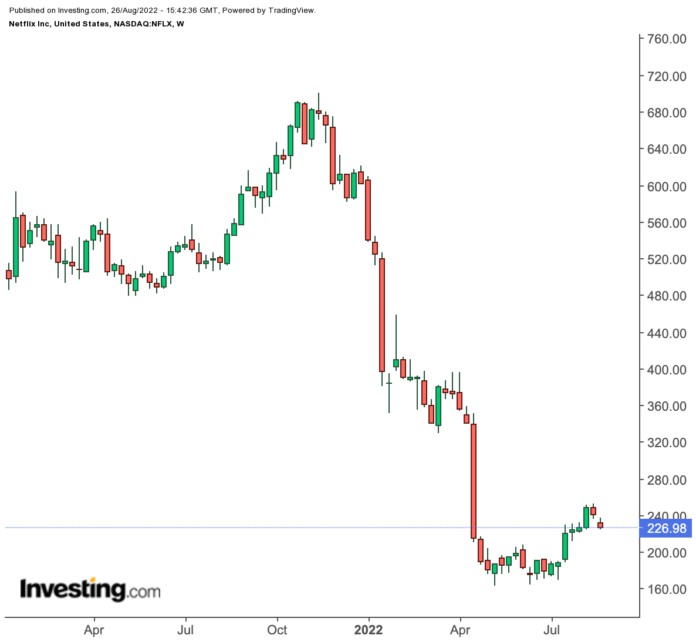 Investors who became too bearish on Netflix (NASDAQ:NFLX) this year seem to be having second thoughts lately. The streaming giant’s shares have staged an impressive turnaround since their May low of $162.71, surging around 40%. NFLX Weekly ChartThe rebound comes amid a devastating year for the Los Gatos, California-based streaming giant. The company lost about a million subscribers in the first half of 2022 as four-decade high inflation and people’s preference to indulge in outside activities after the pandemic lockdowns halted demand for indoor entertainment.

Netflix was also battered by the rising competitiveness in the streaming business, as many deep-pocketed global players, including Walt Disney (NYSE:DIS) and Amazon.com (NASDAQ:AMZN) stepped up their games, taking significant market share.

Despite the past quarter’s surge, Netflix is still the worst-performing stock in the group of FAANG mega-cap stocks, with year-to-date losses of more than 62%

The recent rally reflects optimism about the upcoming version of Netflix’s streaming service that will include advertising and could be cheaper than the existing one. The company is also forecasting to sign up one million new subscribers in the current period.

Co-founder and CEO Reed Hastings had originally positioned Netflix as an advertising-free alternative to cable TV. However, given the current challenges, the CEO has pivoted his opinion and now says commercials are necessary to appeal to people who find the service too expensive. Netflix has raised prices several times and is now one of the most expensive streaming services.

The problem is that the ad-free business is also poised to be a competitive space as Disney plans to launch a similar enterprise on Dec. 8. Furthermore, Netflix has limited experience in the digital ad market.

In a recent note, Needham analyst Laura Martin recommended investors remain on the sidelines as it’s yet not clear how Netflix will perform when the competition is heating up. Her note says:

“Where do its sub losses end, given the strong competition from newer, lower-priced, deeper-pocketed streaming services? 222mm global subs may turn out to be the peak subscribers for NFLX.”

Other analysts seem to be sharing this view. In an Investing.com poll of 45 analysts, 27 rate the stock neutral, six recommend selling it, and another 12 rate it a buy. 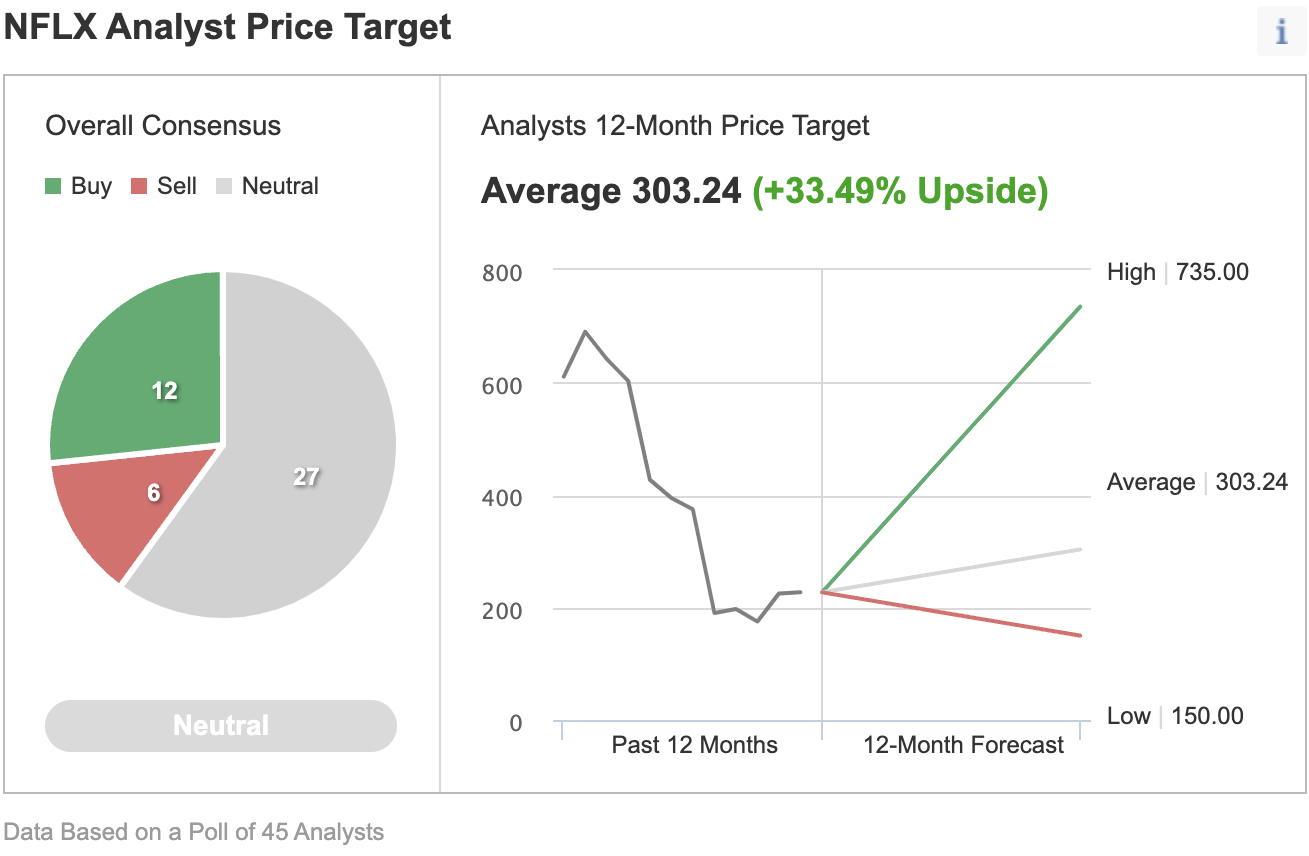 Still, some signs show that Netflix has seen the bottom in the current downturn as investors perhaps turned too bearish on this company, which has an excellent track record of exceeding expectations.

Netflix shares are still cheaper than usual after their rebound, priced at about 22 times profits projected over the next 12 months—well below the 10-year average of 80 times. It is also marginally lower than the average on the Nasdaq 100 of around 24 but higher than the S&P 500’s average of 18.

“We think NFLX has found a bottom, assuming sub-growth doesn’t hit any new cliffs. Next year, new initiatives will start to contribute, and it’s reasonable to expect that the NFLX of 2024 and beyond will have very healthy top-and bottom-line growth + better FCF.”

Netflix may not have much room to rally from the current levels after its recent move higher as investors await the result of its future growth initiatives, such as the launch of its ad-supported service. Given a tough macro environment and stiff competition, Netflix stock continues to remain a risky bet, in my view.