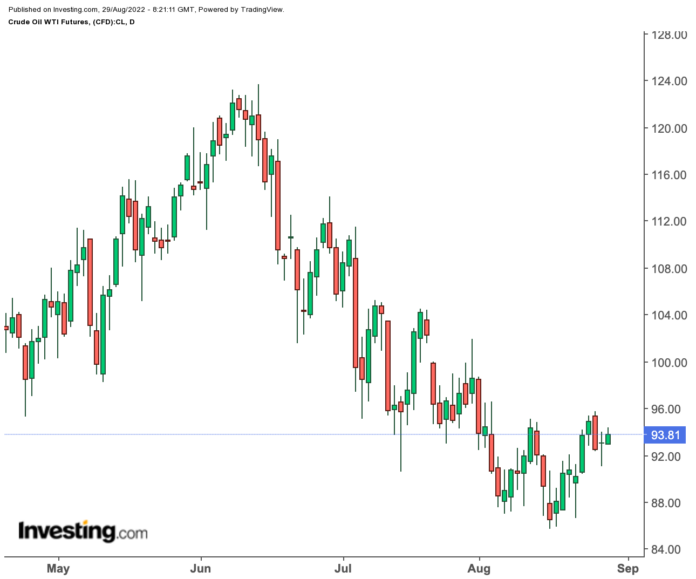 The mantra of ‘OPEC+ cuts’ is expected to pervade the oil market endlessly from here till next week’s meeting of the producer alliance, giving bulls hungry for upside action a chance to make up for some of crude’s losses before the end of August. The situation could be quite the opposite in gold as the Federal Reserve signals no retreat at all in its hawkish pressure to clamp down on inflation.

Crude prices extended their gains from last week in Monday’s Asian session on expectations that the 13-member Saudi-led Organization of the Petroleum Exporting Countries (OPEC+) and its ten oil producing allies steered by Russia will announce production cuts when the group meets on September 5.

OPEC+ production cuts aside, sentiment in oil was also boosted by renewed conflict in Libya, and rising demand amid soaring natural gas prices in Europe that helped offset a dire outlook for growth in the US.

Heavy clashes in Libya’s capital which killed 32 people on the weekend sparked concern that the country could slide into a full-blown conflict, which could again disrupt crude supply from one of OPEC’s larger producers.

Oil prices have been on an upward trajectory of late. A flurry of support was expressed on Friday by OPEC+ member states, including Iraq, Venezuela and Kazakhstan, about readiness within the 23-strong oil producing alliance to intervene and restore balance in the oil market.

A week earlier, OPEC+’s de facto chief Saudi Arabia said the group could cut production “anytime”, after its secretary-general Haitham Al Ghais of Kuwait hinted that output restraint could be an option for bringing the market back into balance.

‘Balance’ is OPEC+’s catchphrase for production cuts, a situation it deems necessary whenever oil prices are at the risk of a continuous decline. From highs of almost $140 a barrel in March, global crude benchmark Brent has come down to just around $100. US crude, meanwhile, hovers at under $95, from peaks of above $130 six months ago.

But the problem with any production cut by OPEC+ is that it will not only boost the price of oil but also that of the pump price of gasoline—something the Biden administration is trying hard to prevent.

Since last November, Team Biden has drawn down the US national emergency oil stockpile to 37-year lows to add up to one million barrels per day of supply to the physical market that would bridge any crude shortfall experienced by US refineries.

The net effect of the drawdown from the Strategic Petroleum Reserve is a US market now that’s virtually swimming in oil, so much so that some of the emergency oil is ending up as US crude exports. Two weeks ago, US crude shipments hit a record high of 5 million barrels per day, adding to global supplies as well.

This is what OPEC+ is concerned about. Surging exports of oil from the US—which is not affiliated in any way with the alliance and cannot be in the future either due to the structure of US competitive laws—could cut into markets held by nations aligned to OPEC+.

Data for the most recent week to August 19 showed that in addition to the shipment of 4.177 million barrels of US crude, there were 6.899 million barrels of gasoline and 2.370 million barrels of other oils that made it for overseas sales last week. The total, of 11.076 million, overwrote the previous week’s grand oil sales of 10.709 million.

In terms of crude production itself, the United States put out 12 million barrels per day last week.

That virtually meant that almost one full day’s production of US oil was now going out in terms of exports, posing serious competition to OPEC+.

WTI’s key bullish level to watch will be a break towards $97.06, said Sunil Kumar Dixit, chief technical strategist at SKCharting.com.

“If WTI gains acceptance above this level, the bullish rebound can continue towards the weekly middle Bollinger Band of $104.40,” he said.

On the gold front, prices of the yellow metal skidded to a one-month low of under $1,730 an ounce on Monday after persistent hawkish signals from the Fed that indicated more large-sized rate hikes coming from the central bank in ensuring inflation does not ramp up again toward four-decade highs. Gold prices have plummeted since Fed Chair Jerome Powell dismissed any notion of a dovish tilt by the central bank, and warned that US consumers and businesses would have to contend with higher interest rates as inflation rises. The Fed Chair also said that economic growth in the country would likely slow as a result.

Powell’s comments spurred a rally in the dollar, with the greenback trading around 20-year highs on Monday. Strength in the dollar, coupled with the prospect of rising interest rates severely dents gold’s outlook for the year.

Over 60% of traders now expect the Fed to hike rates by 75 basis points—the upper end of forecasts—in September. Comments from several Fed officials suggest that US interest rates could end the year significantly above 3%, from the current rate of 2.25% to 2.5%.

Focus this week turns to US payrolls data due Friday, which could give the Fed even more space to raise rates.

Rising interest rates have largely sapped gold’s gains this year, despite the yellow metal seeing some gains during the onset of the Russia-Ukraine conflict. Gold is trading down nearly 5% over the past 12 months, and has slumped nearly 20% from 2022 peaks.