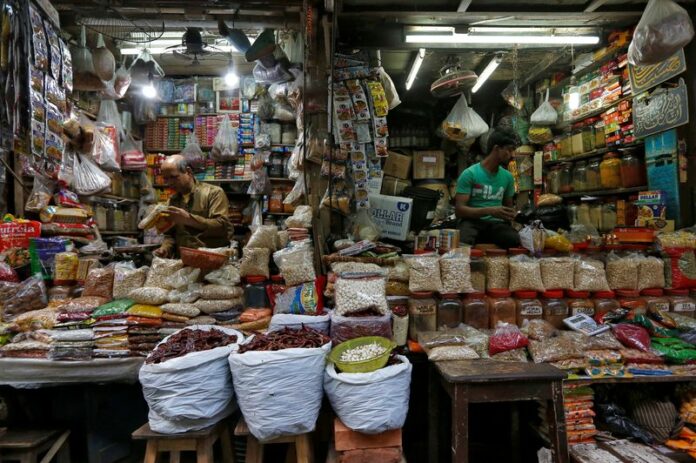 © Reuters. Vendors wait for customers at their respective shops at a retail market in Kolkata, India, December 12, 2018. REUTERS/Rupak De Chowdhuri

By Manoj Kumar and Aftab Ahmed

The monetary policy committee (MPC) of the Reserve Bank of India (RBI) has raised the benchmark repo rate by 140 basis points since May to 5.4%, including 50 basis points last month, aiming to curb consumer demand.

The government imposed curbs on rice exports last week after restricting exports of wheat and sugar earlier, to cool local prices as it is worried that the shortage of rainfall in some parts of the country could drive up food prices.

The annual consumer price index-based inflation rate of 7.00% in August snapped a three-month downward trend, data released by National Statistics Office showed, and came in above both the 6.9% forecast in a Reuters poll of economists and July’s 6.71%.

Food inflation, which accounts for nearly 40% of the CPI basket, rose 7.62% year on year in August, compared to a revised 6.69% in July. (Graphic: India’s retail inflation, https://graphics.reuters.com/INDIA-ECONOMY/INFLATION/dwpkrxjmevm/chart_eikon.jpg)

The MPC will hold its next monetary policy meeting on Sept. 30 and is widely expected to raise the repo rate by 25-50 basis points despite growing fears of its impact on economic growth, economists said.

Sakshi Gupta, principal economist at private lender HDFC Bank, said rising cereal prices continued to be a concern and could add pressure on headline inflation in September as well.

“The RBI is likely to raise rates by 50 basis points at the upcoming policy as inflationary pressures continue to linger.”

Last week, India’s Finance Minister Nirmala Sitharaman said India’s inflation management was driven by many factors, most of which were outside the purview of monetary policy.

Fuel and electricity prices rose 10.78% year-on-year in August, compared with an 11.76% rise in the previous month, data showed.

Core inflation, excluding volatile food and energy prices, was estimated at 5.84%-5.90% in August, compared with 5.79-5.80%estimates in July, said two economists, after the data release.

The rise in food and fuel prices has severely hit poor households, already facing the impact of two years of pandemic.

“We have cut down spending on vegetables,” said Puspanjali Sahu, a resident of the eastern Indian city of Bhubaneswar. “We are not going out to any eatery, we are not watching movies in the cinema hall.”

Indian oil companies have not passed on the benefits of a fall in global crude oil prices, saying they suffered huge losses after a surge in prices following Russia’s invasion of Ukraine.

Citing separate industrial output data released on Monday, Madan Sabnavis, chief economist at Bank of Baroda, said there was disappointment on both the growth and inflation front.