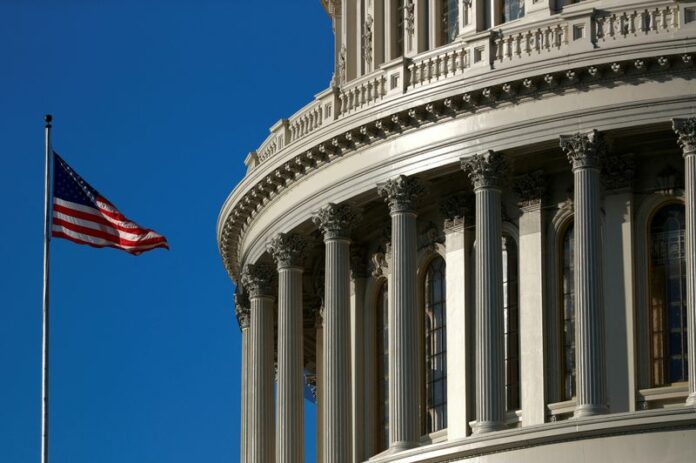 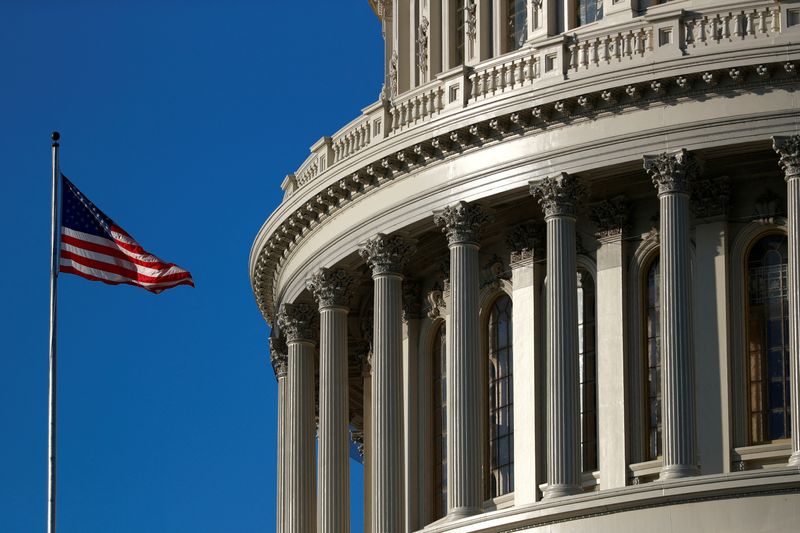 WASHINGTON (Reuters) -The U.S. government on Friday reported that its fiscal 2022 budget deficit plunged by half from a year earlier to $1.375 trillion, due to fading COVID-19 relief spending and record revenues fueled by a hot economy, but student loan forgiveness costs limited the reduction.

The U.S. Treasury said the $1.400 trillion reduction in the deficit was still the largest-ever single-year improvement in the U.S. fiscal position as receipts hit a record $4.896 trillion, up $850 billion, or 21% from fiscal 2021.

President Joe Biden touted the deficit reductions in remarks at the White House and at Delaware State University, and said the deficit would shrink by another $250 billion over the next decade, given Medicare’s ability to negotiate lower drug prices.

Biden chided Republicans for voting against the deficit reduction. While his administration lowered the deficit, it has boosted spending on infrastructure and expanded benefits for middle- and low-income Americans.

“You know, we’ve gone from an historically strong economic recovery to a steady and stable growth, while reducing the deficit,” Biden said.

Outlays for fiscal 2022, which ended Sept. 30, fell by a record $550 billion, or 8% from last year to $6.272 trillion. But the outlays for September, the fiscal year’s final month, included the recognition of $430 billion in costs from the Biden administration’s plan to forgive student debt of up to $20,000 for former college students now earning under $125,000 a year and under $250,000 for married couples.

The move brought the September budget deficit to $430 billion, more than six times the prior-year September deficit of $65 billion. In most years, September is a surplus month due to the payment of quarterly corporate and individual taxes.

The Congressional Budget Office estimated that the plan would cost about $400 billion. It also includes the extension of a COVID-19 moratorium on all student loan payments until the end of 2022, which added about $21 billion in budgetary costs.

U.S. Treasury Secretary Janet Yellen told reporters that the Biden administration was maintaining a “credible fiscal policy” despite the unfunded student debt relief that was a Biden campaign promise.

“I do see our debt as being on a responsible path,” she said, adding that net interest on the debt as a share of GDP was forecast to only rise to about 1%, a “low” historical level.

Revenue gains during September started to slow from prior months, growing only 6% from a year earlier to $488 billion.

And the CBO is projecting that with the economy slowing further amid higher Federal Reserve interest rates, revenues will slow further in future years. Rising interest costs also will start to consume a bigger share of the federal budget, the non-partisan fiscal referee agency predicts.

Marc Goldwein, senior policy director for the Committee for a Responsible Federal Budget, a fiscal watchdog group, said the effect of recognizing the student loan forgiveness costs in fiscal 2022 will be to show a steadier decline in deficits from the pandemic – rather than a sharper narrowing to around $1 trillion, followed by an increase to around $1.4 trillion for fiscal 2023.

The CBO had forecast a fiscal 2023 deficit of about $984 billion, with deficits rising steadily thereafter to nearly $2 trillion by 2030.

“I think it’s more appropriate to recognize the costs as the debt is being canceled, and the bulk of that will happen in fiscal 2023. But the government has latitude here,” Goldwein said in a phone interview prior to the release.