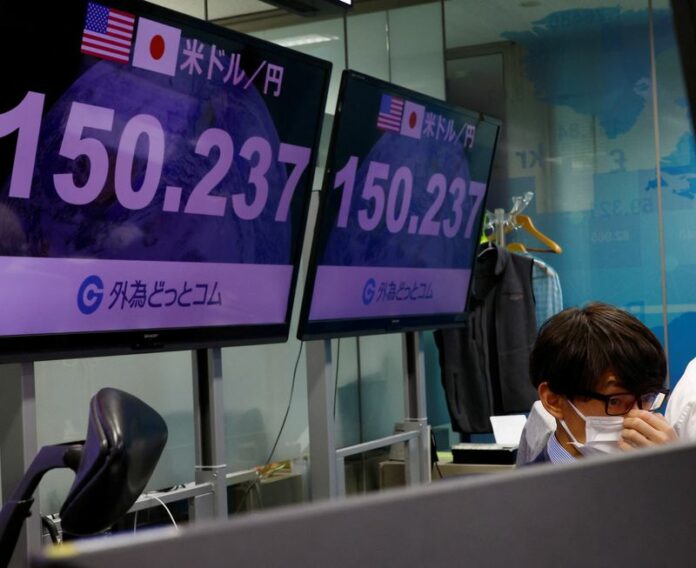 Explainer-Yen is past key 150 threshold. What’s next? 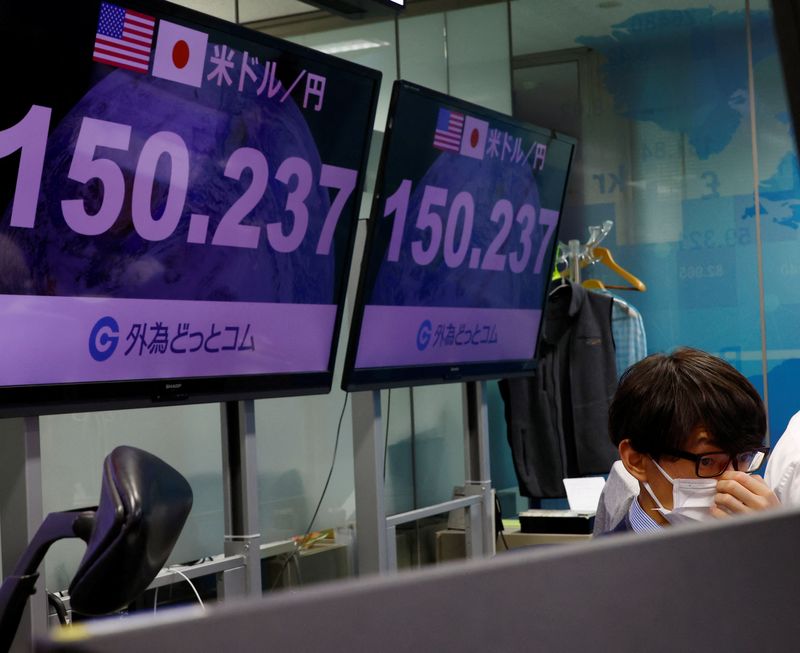 © Reuters. An employee of the foreign exchange trading company Gaitame.com works in front of monitors showing the Japanese yen exchange rate against the U.S. dollar at its dealing room in Tokyo, Japan, October 21, 2022. REUTERS/Kim Kyung-Hoon

TOKYO (Reuters) – The yen tumbled past the key psychological level of 150 to the dollar for the first time since 1990, defying Japanese policymakers’ repeated threats of intervention to address excessive currency market volatility.

Below are details on how Japanese policymakers could respond:

Japan spent roughly 2.8 trillion yen ($18.6 billion) in dollar-selling, yen-buying intervention last month, when authorities acted in the markets to prop up the yen for the first time since 1998.

Since then, policymakers have repeatedly threatened to act against volatile yen moves. They also lobbied, successfully, to include in a G7 finance leaders’ statement last week that authorities will closely monitor “recent volatility” in markets.

But the steps failed to prevent the dollar from gaining 7% against the yen since the Sept. 22 intervention. While the yen has occasionally made suspicious blips, authorities have not disclosed whether they have stepped in since then.

WHAT COULD BE THE TRIGGER FOR NEXT INTERVENTION?

Policymakers have repeatedly said they are looking at the speed of yen moves, not its level, in deciding whether to intervene.

The comments reflect Japan’s need to respect a tacit agreement among G7 advanced nations that intervention would be justified only when aimed at smoothing “excess volatility and disorderly moves” in the market.

That means Tokyo will avoid intervening in a way that appears as if it is defending a certain yen level. Any future intervention is thus more likely when the currency’s fall picks up pace such as on Sept. 22, when it lost nearly a full yen within a short period of time.

WHERE IS THE PAIN POINT, NEXT LINE IN THE SAND?

Prime Minister Fumio Kishida has faced criticism by lawmakers for failing to slow the yen’s relentless fall, which pushes up import costs and households’ living expenses.

While authorities deny having a line-in-the-sand in mind, such political factors mean they do need to be mindful of defending psychologically important thresholds. They also look at technical charts for key support levels for the Japanese currency which, if broken, could accelerate its decline.

Some market players point to the dollar/yen’s September 1990 high of 152.30 as the next threshold, then 155. Others say there is no major barrier until 160. A break above 160 brings the pair to levels unseen since the 1985 Plaza Accord, when major economies, including Japan, took coordinated action to reverse the dollar’s uptrend.

WHAT COULD THE BOJ DO?

With the economic recovery still fragile, the Bank of Japan has shown no appetite to tweak ultra-low interest rates or its dovish policy stance, which are blamed for pushing down the yen.

But the central bank is struggling to maintain its yield curve control (YCC) policy, with rising global interest rates pushing the 10-year bond yield above its implicit 0.25% cap and putting upward pressure on the entire yield curve.

By forcefully controlling the 10-year yield around its 0% target with unlimited bond buying, the BOJ is also giving speculators the green light in dumping the yen and contradicting government efforts to slow the currency’s sharp declines.

If public criticism over the BOJ’s policy heightens, the central bank may come under pressure to modify its dovish communication on the future policy path. That could lead to an eventual tweak to YCC when the dovish governor, Haruhiko Kuroda, sees his term end in April, some analysts say.

So far, however, Kishida is defending the BOJ’s ultra-loose policy and Kuroda, who is facing calls among some opposition lawmakers to step down before the end of his term.