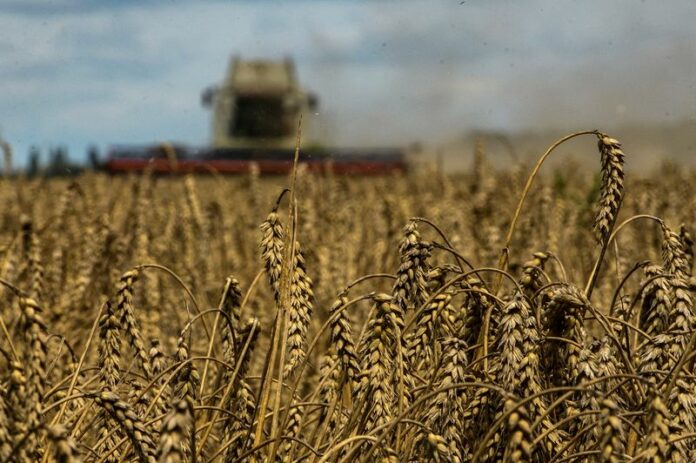 Russia rains missiles on Kyiv, other cities after pulling out of grain deal 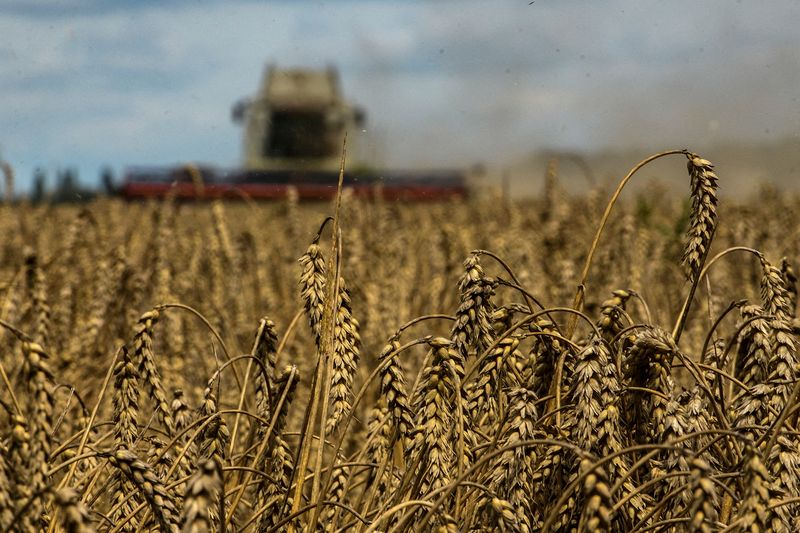 © Reuters. FILE PHOTO: A combine harvests wheat in a field near the village of Zghurivka, amid Russia’s attack on Ukraine, in Kyiv region, Ukraine August 9, 2022. REUTERS/Viacheslav Musiienko/File Photo

KYIV (Reuters) – Blasts were heard in Kyiv on Monday and Ukrainian authorities reported Russian missile strikes around the country, after Moscow blamed Kyiv for an attack on its Black Sea fleet and pulled out of a deal to allow Ukrainian grain shipments.

Russia and Ukraine are both among the world’s biggest food exporters, and a Russian blockade of Ukrainian grain shipments caused a global food crisis earlier this year. Following Russia’s announcement that would halt cooperation with grain exports, Chicago wheat futures jumped more than 5 percent on Monday.[GRA/]

“Don’t justify these attacks by calling them a ‘response’. Russia does this because it still has the missiles and the will to kill Ukrainians.”

“Russia is not interested in peace talks, nor in global food security. Putin’s only goal is death and destruction.”

There was no immediate response from Moscow, which has accused Kyiv of attacking its Black Sea Fleet in a Crimean port with 16 drones on Saturday. Earlier this month, Russia launched the biggest air strikes since the start of the war on Kyiv and other Ukrainian cities, in what it said was a response to an attack on its bridge to Crimea.

Ukraine has neither confirmed nor denied it was behind the attack on the Russian fleet, its typical policy for incidents in Crimea.

Ukrainian President Volodymyr Zelenskiy accused Russia of “blackmailing the world with hunger” by pulling out of the food export deal negotiated by the United Nations and Turkey.

Among vessels held up was one carrying tens of thousands of tonnes of wheat, chartered by the U.N. World Food Programme for an emergency response in the Horn of Africa, Zelenskiy said in an overnight address.

The grain deal required Russia and Ukraine to coordinate inspections and transit of ships through the Black Sea with the United Nations and Turkey acting as mediators.

No ships moved on Sunday. The United Nations said it had agreed with Turkey and Ukraine on a transit plan for Monday for 16 ships to move Black Sea grain – 12 outbound and four inbound. There was no immediate response from Russia.

The United Nations said Russian officials had been told about the plan, along with the intention to inspect 40 outbound vessels on Monday, and noted that “all participants coordinate with their respective military and other relevant authorities to ensure the safe passage of commercial vessels” under the deal.

On Sunday, Russia’s ambassador to Washington, snapped back, saying the U.S. response was “outrageous” and made false assertions about Moscow’s move.

(This Sept 26 story has been refiled to fix spelling of “blackmailing” in paragraph 9.)

India Spices: Coriander, jeera down; turmeric up on short covering

India Spices: Coriander, jeera down; turmeric up on short covering