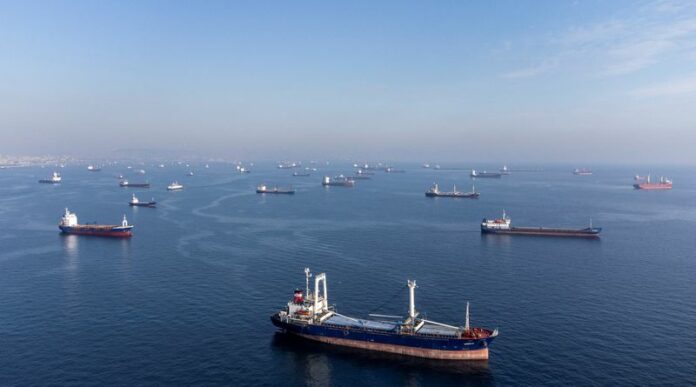 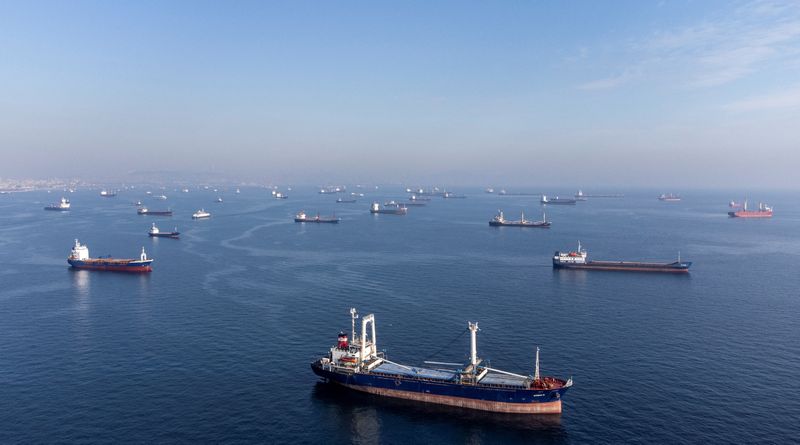 © Reuters. Commercial vessels including vessels which are part of Black Sea grain deal wait to pass the Bosphorus strait off the shores of Yenikapi during a misty morning in Istanbul, Turkey, October 31, 2022. REUTERS/Umit Bektas

By Nigel Hunt and Naveen Thukral

LONDON/SINGAPORE (Reuters) -Grain was flowing out of Ukraine at a record pace on Monday under an initiative led by the United Nations aimed at easing global food shortages despite Russia warning it was risky to continue after it pulled out of the pact.

Russia said on Monday that the deal was hardly feasible as it was impossible to guarantee the safety of shipping after its withdrawal over the weekend following what it said was a major Ukrainian drone attack on its fleet in Crimea.

Other participants, however, were pressing ahead with the deal while France said it was talking to other European Union states about how to boost Ukraine grain exports via land routes.

Ukraine is one of the world’s largest grain exporters and the conflict with Russia led to the closure of its seaports in February, driving up food prices and contributing to a steep rise in acute hunger across the globe.

The deal, signed on July 22, created a safe corridor to allow exports to resume from three Ukrainian ports and helped to ease the crisis with more than 9.5 million tonnes of corn, wheat, sunflower products, barley, rapeseed and soy exported under the pact.

A record volume of 354,500 tonnes of agricultural products was carried on vessels leaving Ukrainian ports on Monday as part of the Black Sea grain deal, a spokesperson for Odesa’s military administration said.

“Civilian cargo ships can never be a military target or held hostage. The food must flow,” tweeted Amir Abdullah, the U.N. official who coordinates the programme.

Russia, however, cast doubts about the future of the pact.

“In conditions when Russia is talking about the impossibility of guaranteeing the safety of shipping in these areas, such a deal is hardly feasible, and it takes on a different character – much more risky, dangerous and unguaranteed,” Kremlin spokesman Dmitry Peskov told reporters.

“From today we are pausing on quoting new shipments until we better understand the situation,” Ascot head of cargo Chris McGill told Reuters. “Insurance that has already been issued still stands.”

Turkey, which helped broker the deal, remained committed to the deal which involves the inspection of cargoes at a Joint Coordination Centre in Istanbul.

“Even if Russia behaves hesitantly because it didn’t receive the same benefits, we will continue decisively our efforts to serve humanity,” President Tayyip Erdogan said in a speech.

Wheat prices rose on Monday, climbing around 6% to $8.79 a bushel in Chicago, but remained far below a peak of $13.63-1/2 set in early March shortly after the conflict began.

The strong pace of wheat exports from Russia, which harvested a record crop this summer, has helped to bolster supplies on the world market.

Consultancy Sovecon on Monday estimated that Russia would export 4.5 million tonnes of wheat in October, up from 2.8 million in the same month last year.

Traders warned that hundreds of thousands of tonnes of wheat booked for delivery to Africa and the Middle East could now be at risk.

“If I have to replace a vessel which was due to come from Ukraine, what are the options? Not much really,” said one Singapore-based grains trader who supplies wheat to buyers in Asia and the Middle East.

Asian buyers booking Ukrainian wheat cargoes include Indonesia, the world’s second-largest importer of the grain, although the region typically relies on Australia and North America.

In recent deals, Indonesian millers bought four cargoes or around 200,000 tonnes of Ukrainian wheat for November shipment in deals signed over the last few weeks, traders said. Some Vietnamese feed mills that bought Ukrainian wheat are also likely to suffer.

Ukraine is a major exporter of corn and there were concerns that shipments to the European Union could be disrupted.

“As far as Europe is concerned, corn is a bigger issue than wheat as we are getting into peak season for Ukrainian corn in November,” said one grain trader said.

“Typically, it takes about two months for higher grain prices to filter through the supply chain and impact consumers at the retail level,” said a Sydney-based analyst.

“But food processors do not have much forward coverage, so it is likely to be a lot quicker.”