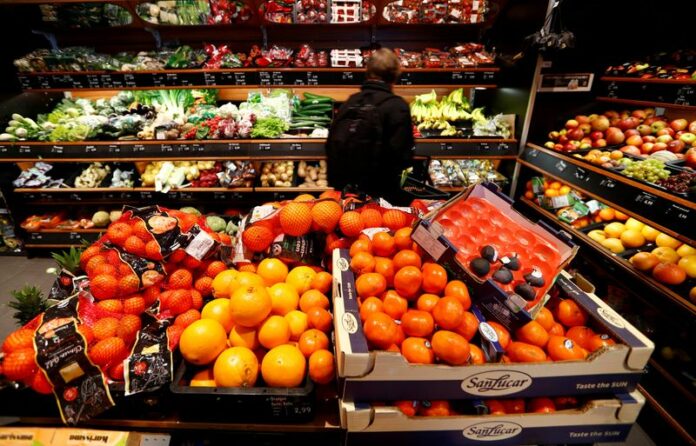 © Reuters. FILE PHOTO: Full shelves with fruits are pictured in a supermarket during the spread of the coronavirus disease (COVID-19) in Berlin, Germany, March 17, 2020. REUTERS/Fabrizio Bensch/File Photo GLOBAL BUSINESS WEEK AHEAD

BERLIN (Reuters) – Germany’s inflation rate is unlikely to decline rapidly at present and the European Central Bank’s target of 2% will only become feasible by the middle of the decade, the BDI industry association said in a survey for Reuters published on Friday.

Inflation, which slowed slightly to 11.3% in November from a high of 11.6% the month prior, is no longer driven primarily by energy costs but by a host of factors, BDI President Siegfried Russwurm said in a survey of several industry associations.

“A return to a level of 2% is likely to take longer and can only be achieved by the middle of the decade if monetary policy takes effect,” he said.

The ECB has raised interest rates by a combined 2.5 percentage points since July – its fastest pace of monetary tightening on record – to counter inflation.

Russwurm said more measures would be decided on by the ECB, which the BDI expects to dampen investment activity.

The heads of the ZDH German association for skilled trade and the DIHK chambers of industry and commerce also do not see inflation cooling off in the near term.

“A noticeable slowdown in price increases is probably not to be expected until summer 2023,” said ZDH Secretary General Holger Schwannecke. “But even then the price level will remain high.”

In DIHK President Peter Adrian’s view, the ECB began its interest rate hikes too late, which means it now must raise them all the faster. “This makes corporate financing more difficult and is an additional burdening factor for businesses.”