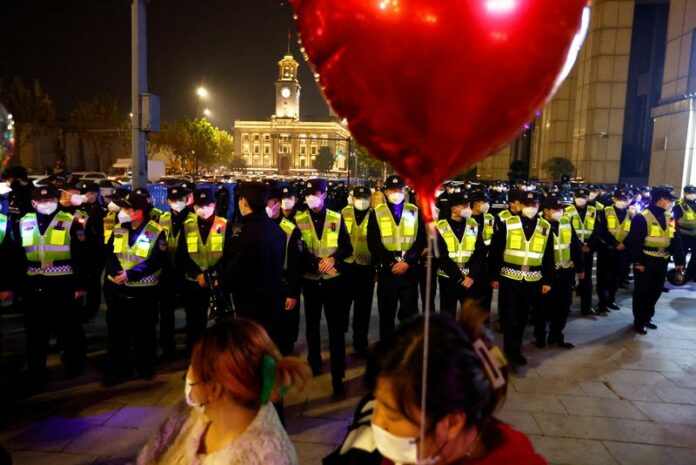 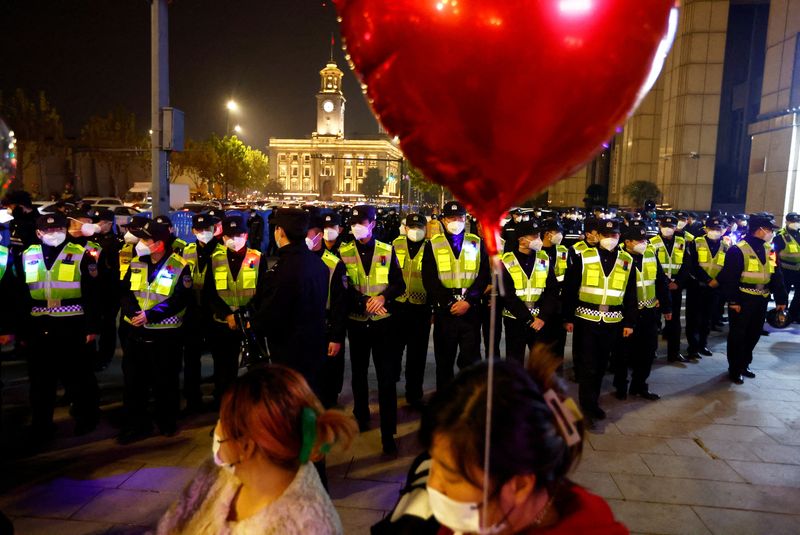 WUHAN (Reuters) -Thousands of Chinese took to the streets to mark the New Year as authorities and state media sought to reassure the public that the COVID-19 outbreak sweeping across the country was under control and nearing its peak.

Though many people in major cities have continued to isolate as the virus spreads through the population, New Year revelries appeared to be mostly unaffected as people celebrated the end of 2022 and the turn into 2023.

In Wuhan, where the coronavirus was first identified at the end of 2019, residents said anxieties about the impact of easing strict zero-COVID restrictions to live with the disease had now abated – at least for the young and healthy.

“Basically, now my friends and I feel relatively positive and optimistic,” said a 29-year old tutor surnamed Wu. “Many people are going out and about.”

A long line of people queued at the emergency department of Wuhan’s Tongji Hospital, a major facility for COVID-19 patients, such as 72-year-old resident Huang, who wanted to be identified by her surname only.

“I don’t feel well. I have no energy. I can’t breathe. I used to be in good health. I had X-rays to check my lungs… This hospital is a lot of trouble, you have to wait a long time,” she said.

China’s abrupt U-turn on COVID controls – as well as the accuracy of its case and mortality data – have come under increasing scrutiny both at home and overseas.

The surge in cases has raised fresh worries about the health of the economy and in his first public comments since the change in policy, President Xi Jinping called in a New Year’s address for more effort and unity as China enters a “new phase”.

China reported one new COVID-19 death in the mainland for Dec. 31, the same as a day earlier, the Chinese Center for Disease Control and Prevention said on Sunday.

The accumulated official death toll in China now stands at 5,249, far lower than in other large countries. The government has rejected claims that it has deliberately underreported the total number of fatalities.

At the Hankou funeral home on the outskirts of Wuhan, an intermittent stream of mourners and hearse drivers were arriving on Sunday.

Staff at the site’s heavily guarded entrance declined to answer questions about their recent workloads. But funeral homes in other cities in China – including Chengdu and Beijing – said that they were busier than ever since China abruptly ditched its COVID curbs last month.

China’s CDC reported 5,138 official confirmed cases on Saturday, but with mass testing no longer in operation, experts say the actual number of infections is significantly higher.

State media in the city of Guangzhou in southeastern China said on Sunday that daily cases peaked at around 60,000 recently, and now stand at around 19,000.

Authorities have been trying to reassure the public that they have the situation under control and state news agency Xinhua published an editorial on Sunday saying that the current strategy was “a planned, science-based approach” reflecting the changing nature of the virus.

Xinhua said separately the manufacturing of medicines had accelerated in the last month, with production of pain relievers ibuprofen and paracetamol now at 190 million tablets per day, five times higher than in early December.

Antigen test kit production has nearly doubled to 110 million per day in a month, it said.

On Sunday, Australia and Canada joined the United States and others in requiring travellers from China to provide negative COVID-19 tests when they arrive. Morocco will impose a ban on people arriving from China, its foreign ministry said.

Australian Health Minister Mark Butler said additional measures would also be considered amid concerns that China is not disclosing enough information about the nature and extent of the current outbreak.

Taiwan President Tsai Ing-wen offered on Sunday to provide China with “necessary assistance” to help it deal with the surge in COVID-19 cases.