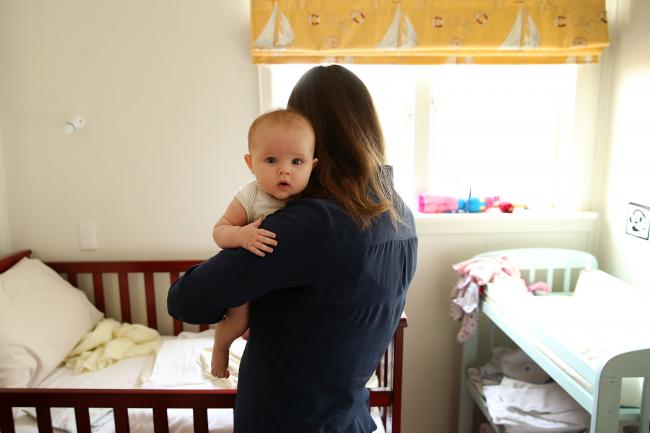 Gender Pay Equity Progress in US Is Slowed by Family Leave, Study Says

&copy Bloomberg. AUCKLAND, NEW ZEALAND – MAY 05: Secondary school teacher Sarah Ward at home on maternity leave with her three month old daughter Esme Kelliher, is in the last week of her paid parental leave allowance ahead of the New Zealand Federal Budget release, on May 5, 2015 in Auckland, New Zealand. New Zealand’s Minister of Finance Bill English has announced that Budget 2015 will be presented on May 21, 2015. (Photo by Fiona Goodall/Getty Images)

(Bloomberg) — Family leave policies, though limited in scope and typically unpaid in the US, have hamstrung the progress toward gender wage parity since the 1990s, according to an economic paper.

The policies, led by the federal Family and Medical Leave Act enacted in 1993 and other state-based programs, account for 94% of the stalling out of steady improvement that had taken place in the two preceding decades, according to economists Peter Blair, of Harvard University, and Benjamin Posmanick of St. Bonaventure University.

“During the 1980s, the wage gap between White women and White men in the US declined by approximately 1 percentage point per year,” Blair and Posmanick wrote in the paper, distributed by the National Bureau of Economic Research. “In the decades since, the rate of gender wage convergence has stalled to less than one-third of its previous value.”

The economists cite other research showing that parental leave, disproportionately taken by women, and other forms of flexible work arrangements, tend to have a negative impact on women’s career trajectories and pay. Their analysis accounts for changes in the composition of the US labor market, including an expansion of the low-wage service sector, where female workers are overrepresented.

Blair and Posmanick estimate that without family leave policies, the gender wage gap in the US between White women and White men could have been eliminated in 2017.