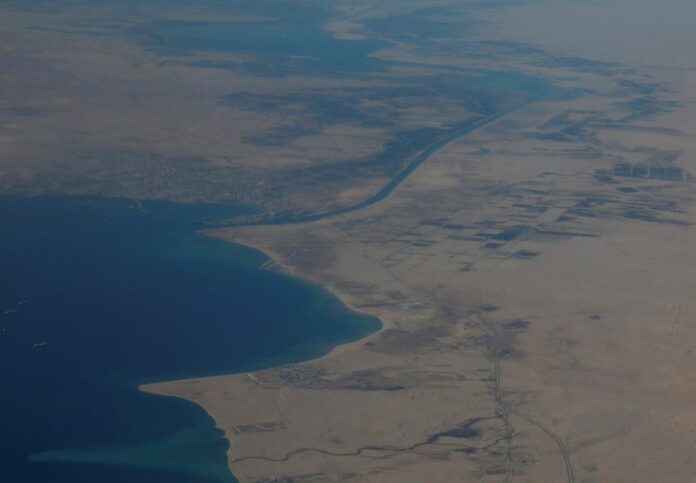 © Reuters. An aerial view of the Gulf of Suez and the Suez Canal are pictured through the window of an airplane on a flight between Cairo and Doha, Egypt, November 27, 2021. REUTERS/Amr Abdallah Dalsh

CAIRO (Reuters) -Shipping traffic in the Suez Canal was proceeding normally on Monday after tugs towed a cargo vessel that broke down during its passage through the waterway, the Canal Authority said.

The breakdown was expected to cause only minor delays, with convoys of ships resuming regular transit by 11:00 local time (09:00 GMT), shipping agent Leth said.

The M/V Glory, which was sailing to China, suffered a technical fault when it was 38km into its passage southward through the canal, before being towed by four tugs to a repair area, the Suez Canal Authority (SCA) said in a statement.

The Suez Canal is one of the world’s busiest waterways and the shortest shipping route between Europe and Asia.

In 2021, a huge container ship, the Ever Given, became stuck in high winds across a southern section of the canal, blocking traffic for six days before it could be dislodged.

The M/V Glory is a Marshall Islands-flagged bulk carrier, data from trackers VesselFinder and MarineTraffic showed.

The JCC, which includes representatives from the United Nations, Turkey, Ukraine and Russia, said the ship had been cleared to carry on its journey from Istanbul after an inspection on Jan. 3.