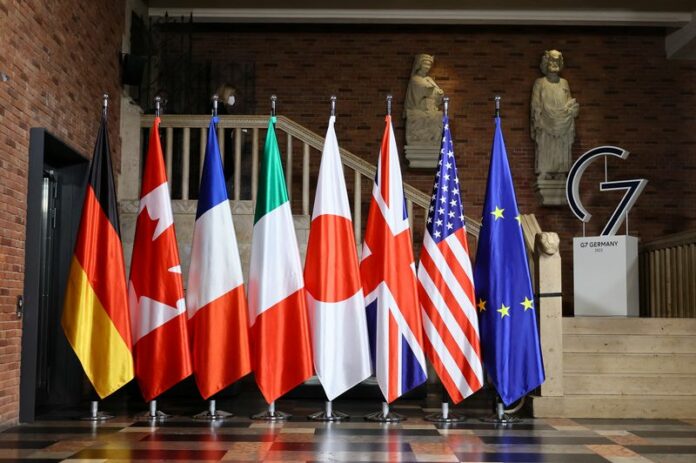 BRUSSELS (Reuters) – The Group of Seven (G7) coalition will seek to set two price caps on Russian refined products in February, one for products trading at a premium to crude oil and the other for those trading at a discount, a G7 official said.

The coalition – which consists of Australia, Canada, Japan and the United States, plus the 27-nation European Union – introduced a $60 per barrel price cap on Russian crude from Dec. 5, on top of the EU embargo on imports of Russian crude by sea.

From Feb. 5, the coalition will also impose price caps on Russian products, such as diesel, kerosene and fuel oil, to further reduce Moscow’s revenue from energy exports and its ability to finance its invasion of Ukraine.

But capping oil product prices is more complicated than setting a price limit on crude alone, because there are many oil products and their price often depends on where they are bought, rather than where they are produced, the official said, asking not to be named.

Citing the example of diesel and kerosene that tend to trade at a premium to crude, while fuel oil typically sells at a discount, he said this was why the G7 was considering two price caps.

While keen to deprive Moscow of revenues, the coalition wants to avoid unbalancing the global energy market and raising prices for consumers in their own countries.

International oil prices gained some value after the original Dec. 5 price cap, because of fears of disruption, but have since retreated.

Russia has pledged not to sell oil to countries adopting the caps, which for Europe could be particularly complicated in the case of refined products.

Europe remains heavily reliant on Russian diesel, with volumes last month accounting for nearly half of the continent’s total imports based on Refinitiv data.

Product prices depend on specifications, including sulphur and metals content. For example, low-sulphur fuel oil currently trades at about $150 a tonne above the high-sulphur variety.

Diesel prices are trading at a premium of $40 a barrel above Dated Brent prices, based on Reuters assessments.