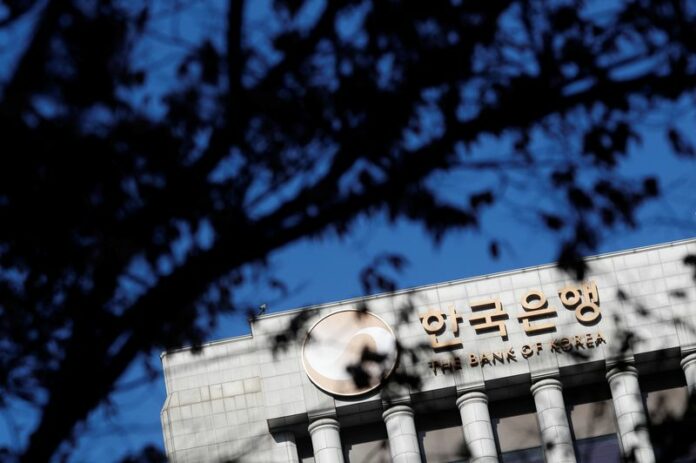 © Reuters. FILE PHOTO: The logo of the Bank of Korea is seen in Seoul, South Korea, November 30, 2017. REUTERS/Kim Hong-Ji

BENGALURU (Reuters) – The Bank of Korea will raise interest rates by another quarter percentage point on Friday, likely its last move in an aggressive tightening cycle aimed at quelling inflation running at more than twice its 2% target, a Reuters poll has found.

One of the first major central banks to kick off a hiking cycle back in August 2021, the BOK has lifted rates by a total of 275 basis points to 3.25% but is under pressure to ensure a soft landing for the economy.

BOK Governor Rhee Chang-yong said in November the central bank was ready to slow the pace of policy tightening and suggested the rate would peak in this cycle at around 3.50%.

“We are looking for one last rate hike of the cycle on Friday. We think it will be non-unanimous where one dissenter calls for a no change,” said Kathleen Oh, economist at BofA.

“That would send a message there is less chance of an additional rate hike from there,” she said.

“Recent developments, especially on the inflation front, have come down to the point where the members can take a little bit of comfort, that there is a sign of stabilizing inflation.”

Policymakers worry South Korean households, already among the world’s most indebted, were more susceptible to interest rate rises because of the prevalence of variable mortgage rates. Real estate prices are already falling.

Three quarters of respondents, 30 of 40, forecast the key interest rate to remain unchanged at 3.50% until end-March. But seven expected another hike by 25 basis points to 3.75% and three predicted rates to still be at 3.25%.

However, median forecasts predicted the base rate to stay at 3.50% until the end of this year.

“Inflation is still a concern … and is likely to stay above 4% until 1Q23,” wrote Lee Seung-hoon, chief economist at Meritz Securities.

“Like the Federal Reserve, (the) BOK will now move to higher for longer strategy instead of conducting further rate hikes beyond January. With household debt service elevated, further hikes beyond 3.50% may cause additional downsides for the economy with limited impact on inflation.”

With inflation expected to fall within target next year, median forecasts from economists who had a long-term view showed rates falling to 2.75% in the third quarter of 2024.