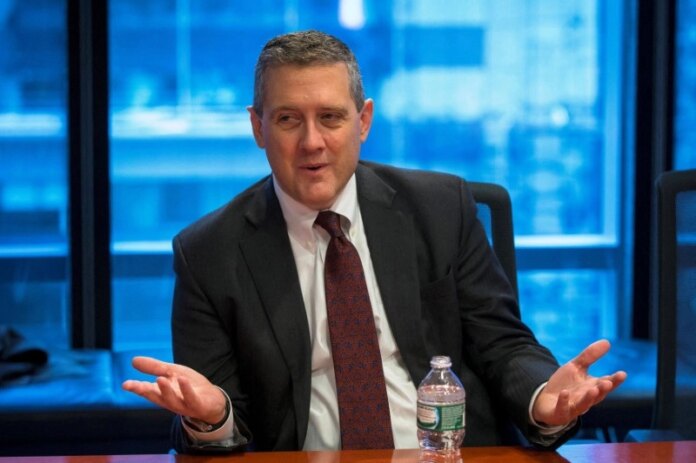 (Reuters) – The U.S. economy is primed for disinflation this year but the path back to the Federal Reserve’s 2% target will be bumpy and require interest rates to remain higher for longer, St. Louis Fed President James Bullard said on Thursday.

“It is encouraging that we got some information today that went in the right direction,” Bullard said during an event organized by the Wisconsin Bankers Association, referencing government data released earlier on Thursday that showed U.S. consumer prices fell for the first time in more than 2-1/2 years in December. “So far, so good. My bottom line for 2023 is that it will be a year of disinflation.”

Following the data, investors in fed funds futures predicted the Fed will opt for a quarter percentage point interest rate increase at the conclusion of its next policy meeting on Feb. 1 and ultimately stop raising rates before they get to 5%.

Bullard also once again stated a preference for getting the Fed’s policy rate north of 5% “as soon as possible” but conceded that the tactics of how quickly to get there was less important than the eventual stopping point and ruled out any swift action by the Fed to cut rates even if inflation continues on its downward path.

“There’s probably too much optimism inflation is going to easily come back to 2%. That is not the history of inflation,” Bullard said, noting that he expects the path down to be bumpy. “We are really moving into an era of higher nominal interest rates for quite a while going forward as we try to continue to put downward pressure.”

The Fed’s main policy rate currently sits in a target range of 4.25% to 4.50% and central bank policymakers have already made clear they hope to stop raising rates this spring.

Bullard also repeated comments made last week that recession risks over the past three months had receded “some” and that the prospects of inflation coming down without a sharp rise in unemployment, a so-called ‘soft landing,’ have improved.