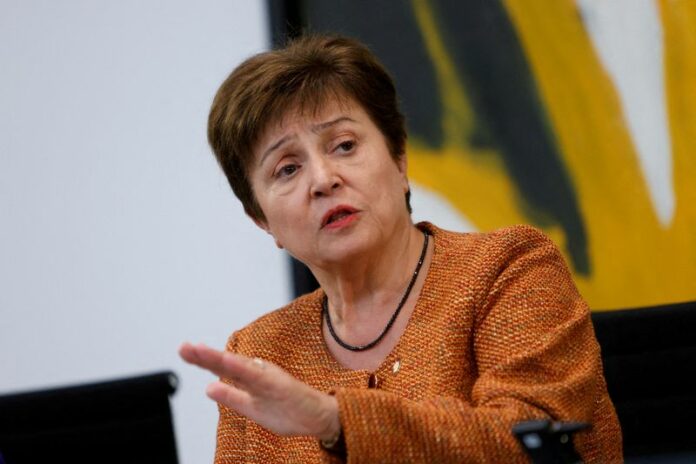 WASHINGTON (Reuters) -The International Monetary Fund is not likely to downgrade its forecast for 2.7% growth in 2023, the head of the global lender said on Thursday, noting that a feared oil price spike had failed to materialize and labor markets remained strong.

IMF Managing Director Kristalina Georgieva said 2023 would be another “tough year” for the global economy, and inflation remained stubborn, but she did not expect another year of successive downgrades like those seen last year, barring unexpected developments.

“Growth continues to slow down in 2023,” she told reporters at the IMF’s headquarters in Washington. “The more positive piece of the picture is in the resilience of labor markets. As long as people are employed, even if prices are high, people spend … and that has helped the performance.”

She added that the IMF did not expect major downgrades, although the final number had not been determined. “That’s the good news.”

Georgieva said the IMF expected the slowdown in global growth to “bottom out” and “turn around towards the end of ’23 and into ’24.”

Georgieva said there was much hope that China – which previously contributed some 35% to 40% of global growth, but had “disappointing” results last year – would once again help fuel global growth, likely from mid-2023. But that depended on Beijing not changing course and sticking to its plans to reverse its zero-COVID policies, she said.

“What is most important is for China to stay the course and not to back off from that,” Georgieva said, calling developments in China “very likely the single most important factor for global growth.”

She said the United States – the biggest economy in the world – was likely to see a soft landing, and would suffer only a mild recession, if it did enter a technical recession.

But Georgieva said great uncertainty remained, citing the risk of a significant climate event, a major cyberattack or the danger of escalation in Russia’s war in Ukraine, for instance through the use of nuclear weapons.

“We are now in a more shockprone world and we have to be open-minded that there could be a risk turn that we are not even thinking about,” she said. “That’s the whole point of the last years. The unthinkable has happened twice.”

She cited concerns about growing social unrest in Brazil, Peru and other countries, and the impact of tightening financial conditions remained unclear.

But inflation remained “stubborn” and central banks should continue to press for price stability, she added.