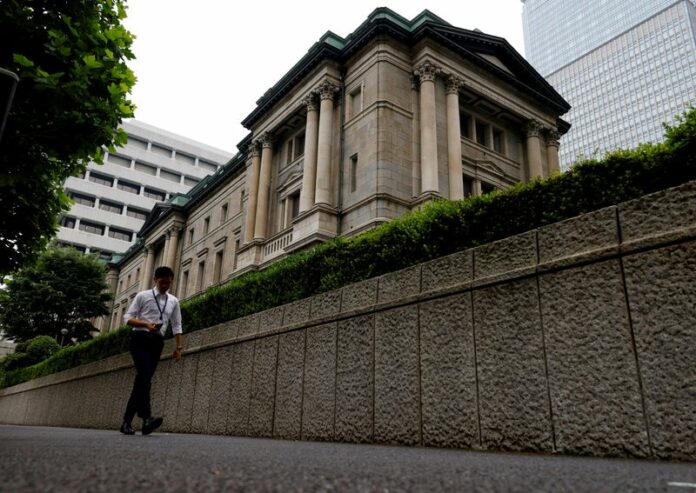 By Kevin Buckland and Junko Fujita

TOKYO (Reuters) – The yield on Japan’s benchmark 10-year government bonds breached the central bank’s new ceiling on Friday in the market’s most direct challenge yet to decades of uber-easy monetary policy, before a wave of emergency bond buying reined it back in.

Swirling speculation that the Bank of Japan’s policy of yield curve control (YCC) could be revised, or even abandoned, as early as next week had investors rushing for the exits.

That catapulted 10-year Japanese government bond yields as much as 4 basis points higher to 0.54%, the highest since mid-2015 and above a recently widened band of -0.5% to +0.5% set by the BOJ in a shock decision just three weeks ago.

The stress was evident across the yield curve, forcing the BOJ to announce two separate rounds of emergency buying worth around 1.8 trillion yen ($13.9 billion) combined. The central bank already holds 80% to 90% of some bond lines.

Later in the day, the BOJ said it would conduct additional outright bond purchases on Monday.

The BOJ is an outlier in clinging to stimulus while most central banks globally are deep into rate-hiking campaigns, but signs of stickier inflation and a possible rise in Japan’s mostly stagnant wages have emboldened some investors.

Most domestic analysts, though, hold to the view that no major shift will come until Haruhiko Kuroda, the current BOJ governor and author of Japan’s super-stimulus policy, retires at the end of March.

“I think it’s too early for the BOJ to give up,” said Naka Matsuzawa, chief Japan macro strategist at Nomura. “It still has ammunition to defend the 0.5% yield cap.”

Offshore investors sold record amounts of Japanese government bonds in the week the central bank widened the band, scenting that its six-year old YCC policy was on the way out.

A shift appeared more imminent after the Yomiuri newspaper reported on Wednesday that BOJ officials would review the side effects of YCC at their two-day meeting ending next Wednesday.

There is talk in the markets that the central bank could shorten its yield target to three- and five-year bonds, but history abroad suggests the strain will remain.

Much the same conundrum was faced by the Reserve Bank of Australia (RBA) in late 2021 when it was forced to abandon its three-year yield target in a painful reversal.

With the local economy recovering faster than expected and inflation accelerating, the RBA realised its pledge to keep three-year yields at 0.1% out to 2024 was no longer credible.

So it abruptly dropped the whole thing and three-year yields spiked to 0.48%, an episode the RBA itself conceded caused “reputational damage” that would not be repeated.

The similarities are striking given data this week showed inflation in Tokyo, a leading indicator of nationwide trends, unexpectedly rose at double the central bank’s 2% target.

At the same time, Uniqlo store operator Fast Retailing said it would hike wages by as much as 40%, concentrating mainly on Japan, giving hope that salaries might finally start to catch up to inflation.

The challenge, then, will be for policymakers to find a way to exit YCC without too much damage to markets.

“The bond market is very illiquid and any major selloff could push long-term rates up to one and a half percent in a very short time,” said Amir Anvarzadeh, a market strategist at Asymmetric Advisors.

“So you can’t just abandon this overnight, you have to do it gradually.”