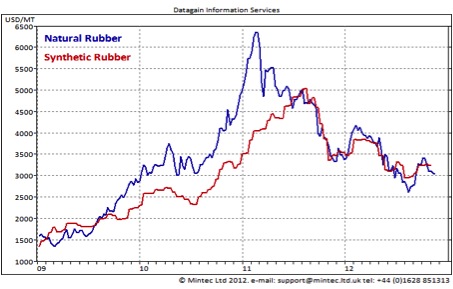 Back in July, we specifically looked at rubber used for tire manufacture, but let’s take a more general look at the rubber marketplace.

The world’s rubber is sourced from two very different origins. 40-45% is still produced naturally (in the form of latex from the sap of the rubber tree), mostly from Southeast Asia, but the majority is now produced from crude oil derivatives such as styrene and butadiene.

Tires, as mentioned in our earlier post, are the primary use for both natural (80%) and synthetic (55%) rubber. It is therefore unsurprising that China, with its rapidly increasing automobile ownership, accounts for the largest share of world rubber consumption.

World natural and synthetic rubber prices have recently returned to the downward trend seen for most of 2012 due to the weak economic conditions in China and the US, the world’s top two economies (and top two consumers of rubber). Natural rubber has been weighed on by a forecast 5% rise in production from the main producing countries in Southeast Asia to 10.83m tonnes in 2012. This region is responsible for 92% of global natural rubber supply. Natural rubber prices in both Thailand and Malaysia are currently down year-on-year, and are sharply down from the peak seen at the start of 2011.

Natural rubber prices had received some support over the past couple of months as Thailand, the world’s largest producer, introduced a government-backed deal to purchase 300,000 tonnes of Thai rubber at above-market rates in an effort to support farmers’ incomes. Prices in Thailand and Malaysia also received support after it was announced that the top three natural rubber producing countries (Thailand, Indonesia, and Malaysia) had made plans to cut production and natural rubber exports in an attempt to reverse recent price falls. These countries are aiming to cut exports by 300,000 tonnes year-on-year in the six months to March 2013. In addition, they plan to reduce production by accelerating the felling of around 100,000 hectares of aging rubber trees over this period. If realised, this may lower exports by a further 150,000 tonnes.

Meanwhile, synthetic rubber prices have been supported by a recovery in the price of crude oil since the dip seen in June. Prices recovered quickly as ongoing geopolitical tensions in the Middle East continued to threaten the security of global supply. Production in Iran fell to its lowest level in two decades as the EU and US ban on Iran’s oil imports came into effect on 1st July 2012. Despite an increasingly gloomy global economic outlook, world crude oil demand is still expected to grow by 0.7m bbl/day in 2012, only a fraction below the 10-year average growth of 1.1m bbl/day. Political tensions continue to escalate in the Middle East, raising risks of potential supply disruptions to the crude oil supply.

In more positive news for the rubber market, China’s tire production rose 1.2% year-on-year to 77.67 million units in October. In the first 10 months of the year, tire output totalled 729.32 million units, up 3.6% year-on-year. Only time will tell how quickly the US economy bounces back to full health, but the outlook for rubber currently seems to be good.