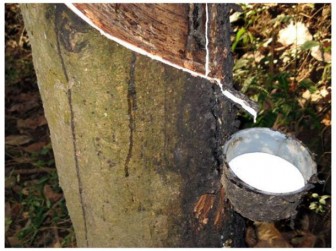 SINGAPORE, Nov 26 (Reuters) – Tokyo rubber futures are set to track movements in oil prices this week, trading in a range of 20 yen a kg, as tension in the Middle East helps the market resist pressure from high inventory in main consumer China, dealers said on Monday.

Among other soft commodities, Thai sugar premiums could slip as crushing picks up, roasters may chase robustas from Vietnam and Indonesia, and Asian butter ratios enjoy firm demand from chocolate makers in Europe.

The most active rubber contract on the Tokyo Commodity Exchange, April, rose as high as 263 yen a kg, to stand at its strongest since Oct. 29, on a weaker yen and gains in oil. In theory, high crude oil makes synthetic rubber more expensive.

“I think crude oil is supportive for rubber because there are a lot of uncertainties in the Middle East. We are looking at a range of 250 yen to 270 yen, which is the strong resistance level,” an agriculture analyst in Kuala Lumpur said.

“But the debt crisis in Europe is grinding. I wouldn’t say bearish or bullish either. It’s a mixed market. I don’t see any follow through buying even if the market moves upward. It’s a ranged market.” Brent crude held above $111 a barrel as hopes that Greece could avoid a near-term bankruptcy brightened the outlook for oil demand from Europe, while violent protests in Egypt reignited supply concerns.

Rubber inventories in key Shanghai warehouses rose by more than a third from the previous week to reach their highest in 2-1/2 years on Friday, as sluggish demand from end-users swelled stockpiles.

Manufacturers have also turned to cheaper imports to meet their needs. Imports in the first 10 months of the year have risen about six percent from a year ago to stand at 1.75 million tonnes.