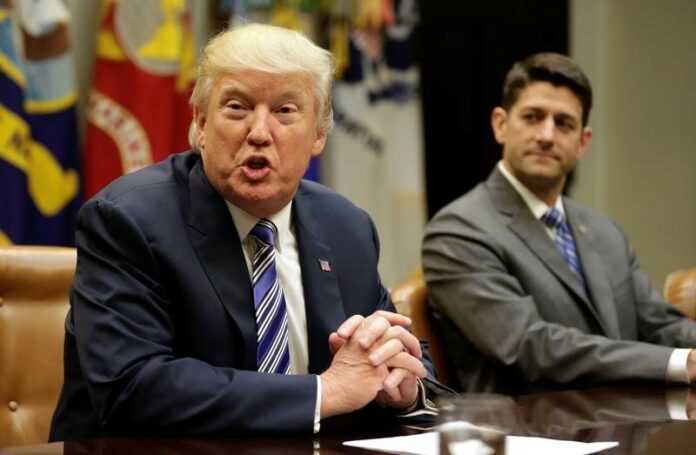 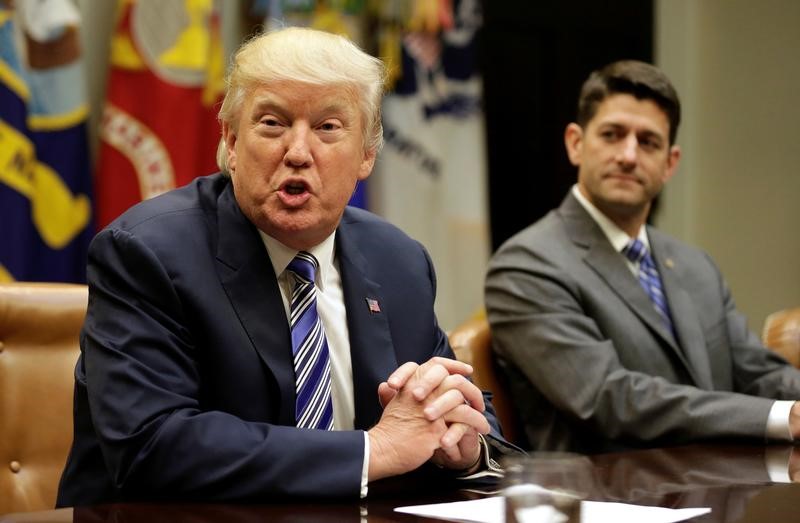 © Reuters. FILE PHOTO – U.S. President Trump meets with Speaker of the House Ryan and other members of the Republican Congressional leadership at the White House in Washington

WASHINGTON (Reuters) – Even before completing their overhaul of the U.S. tax code, Republicans in Washington have begun turning their attention to changes and possible cuts in the social safety net of government programs for the poor, children, elderly and disabled Americans.

President Donald Trump, House of Representatives Speaker Paul Ryan and other Republican officials in recent remarks have made clear that welfare or “entitlement reform,” as they often call it, will be a top priority for them in 2018.

“Next year, we’re going to have to get back to entitlement reform,” Ryan said on a radio talk show on Wednesday.

In Republican parlance, “entitlement” programs mean food stamps, housing assistance, Medicare and Medicaid health insurance for the elderly, poor and disabled, as well as other programs created to assist the needy.

Democrats in Washington have seized on Ryan’s remarks, saying they show that Republicans will attempt to pay for their tax overhaul, still incomplete on Friday but nearing the finish line, by pivoting to seeking cuts in entitlement spending.

Republican plans to slash taxes on corporations and the rich would raise the federal budget deficit and U.S. debt by about $1 trillion over 10 years. For months, most Republicans – who have long argued against running up the deficit – have downplayed that impact.

But next year, Democrats are predicting that Republicans will return to a more customary message for them – that deficits and debt do matter, and that the best way to address that problem is by cutting federal spending.

“The Republicans’ next chapter will be, ‘Oh, we have a deficit, we have to do something about it, let’s cut Medicare and let’s cut Medicaid,” Democratic Senator Ben Cardin told a news conference on Thursday.

Negotiators from the Senate and House on Friday were still hammering out a final version of a Republican tax bill that they want to send to Trump by the end of the month to sign into law.

Crafting a single tax bill acceptable to both the Senate and the House is proving difficult. Though lawmakers are working on a tight timetable and talks could still falter, Republican leaders are expressing confidence that a deal will be struck.

“When they finish their work, members of both chambers will have the opportunity to pass this tax reform legislation and send it to President Trump,” Senate Majority Leader Mitch McConnell said on Thursday, calling the tax legislation the “single most important thing” Republicans can do to help the economy grow.

The rival Republican tax bills already passed by the House and Senate both would deliver roughly $1.5 trillion in tax cuts over the next decade, with businesses and wealthy Americans scoring the biggest gains.

The bills would add about $1 trillion to the federal deficit over the same period, according to government estimates, even after taking into account projected economic growth.

Enacting the tax bill would trigger automatic cuts to a variety of programs, including Medicare, due to a congressional budget rule that requires laws that increase the deficit to offset it with cuts to mandatory spending programs.

The “pay-as-you-go” rule applies to the Medicare health insurance program for the elderly and disabled, but cuts to that program would be capped at 4 percent, or up to $28 billion in 2018, according to government estimates.

Medicaid, the Social Security retirement program, food stamps and other programs for the poor are exempt from such automatic cuts.

To secure the Republican votes needed to pass the Senate’s version of tax legislation on Dec. 2, Ryan and McConnell pledged not to allow automatic cuts to Medicare. “This will not happen,” they said in a joint statement.

As a presidential candidate last year, Trump said he would not cut Medicare, Medicaid or Social Security.

But Ryan said on Wednesday that in private conversations with the president, he believes he has started convincing Trump that changes to Medicare may be needed.

Trump last month said that “very shortly after taxes,” the White House would be “looking very strongly at welfare reform.”

White House economic adviser Kevin Hassett said at a Thursday event hosted by the pro-business American Council on Capital Formation group that the White House has been studying possible changes to the welfare system.

“You’re going to hear a lot of lingo about entitlement reforms and welfare reforms,” Wyden said on Thursday.