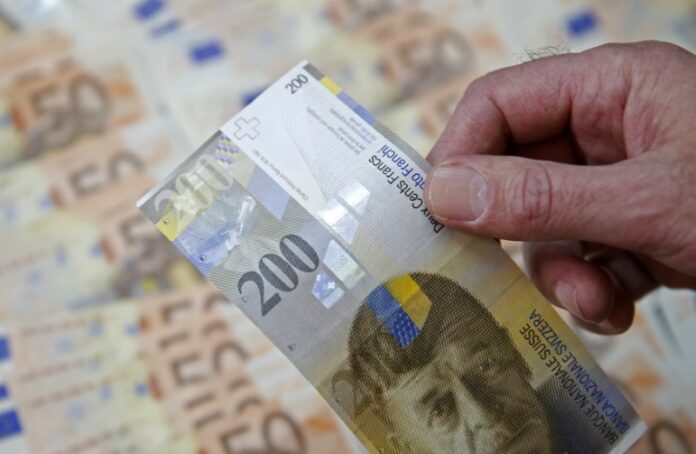 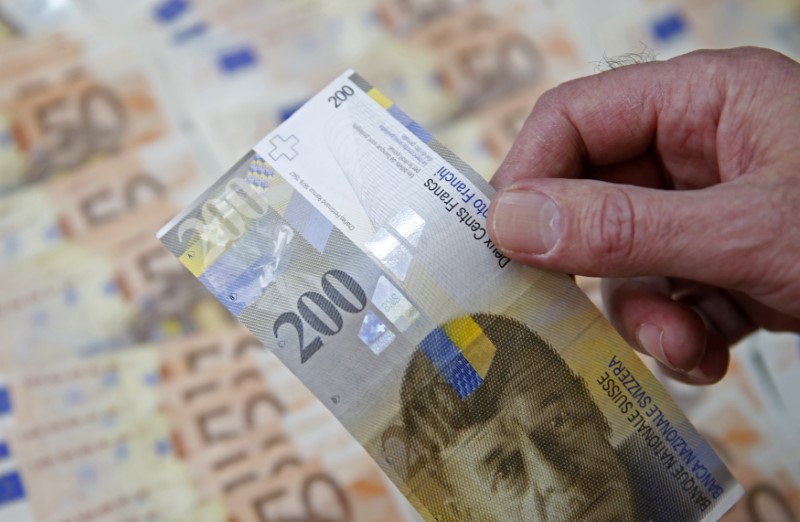 By Tommy Wilkes and Ritvik Carvalho

LONDON (Reuters) – Banks are touting a short position against the Swiss franc as a top bet in 2018 because Switzerland’s central bank is likely to lag its euro zone counterpart in tightening monetary policy and probably won’t tolerate the currency’s gaining much further.

The Swiss currency has bounced from a three-year low against the euro this month, ending a long period of depreciation, in part because this week’s brutal sell-off in equities encouraged some to seek the relative safety of the franc.

But at a time when policymakers are beginning to withdraw extraordinary policy stimulus, analysts expect the Swiss National Bank will stick to its easy-money program for longer. The central bank says the franc is overvalued and a threat to its exporters, and unwinding monetary stimulus could boost the currency.

Participants in a Reuters poll expect the franc to reach 1.20 against the euro by the end of 2018. That is where it was trading before the SNB sent the franc soaring in Jan 2015 by suddenly removing its cap on the currency’s value.

Analysts, however, expect the SNB to intervene to stop appreciation if the franc strengthens much more. They also expect markets to focus on monetary policy divergence.

“The Swiss rates market has started to price in rate hikes at the same level as the ECB. But when you look at the messages from the SNB, we think they are unlikely to raise rates as the ECB does,” said Michael Sneyd, global head of FX Strategy at BNP Paribas (PA:). “You have a backdrop of a very strong European economy.”

The French bank this week advised clients to sell the franc against the euro and set a 1.20-franc target for the next six months.

UBS’s Chief Investment Office introduced a one-month target of 1.19 francs, although it added a stop-loss at 1.15 that was breached on Thursday.

It said a “softer alone” was not a good indication that the SNB would shrink its balance sheet.

Credit Agricole’s Manuel Oliveri said the franc’s “gradual depreciation trend” was intact, although a rise to 1.14 against the euro was possible before renewed falls. The bank maintained its year-end forecast of 1.19.

The franc is regarded as one of the world’s most overvalued currencies, especially when compared with its long-term average.

Some experts disagree with the comparison – Stefan Gerlach at EFG Bank says the franc has recently been only “a little overvalued” versus its equilibrium level.

What matters more is the SNB’s view, and most analysts remain convinced the bank regards the franc’s value as too high.

In late January, rumors circulated that the SNB had again intervened. Last year, when the franc appreciated as investors sold the euro amid uncertainty over the French election result, data suggests the SNB moved to stop the rise.

Bets on renewed franc weakness, however, are at risk of the currency’s reputation as a safe haven. The sudden and sharp drop in equities this week has served as a brutal reminder to investors that markets are not a one-way bet.

For now analysts are playing down the likelihood of further franc appreciation, even if there is a longer-term equity slump.