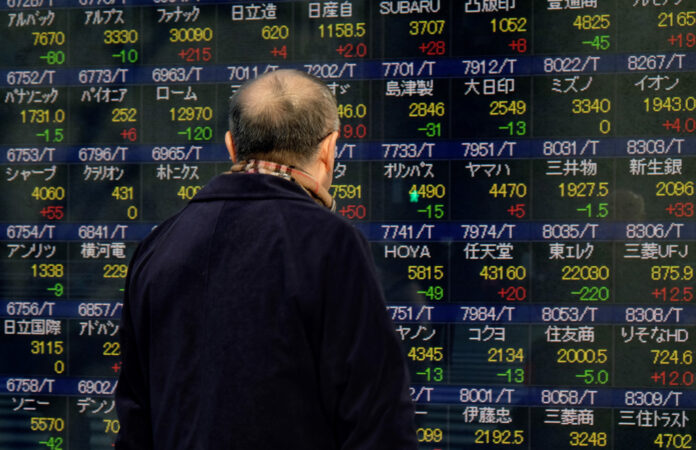 HONG KONG: Asian markets largely rose on Wednesday, tracking a Wall Street rally after the Federal Reserve chief expressed confidence in the US economy despite fears of a global trade war.

“Powell’s testimony was music to investors’ ears as the Dow gained for the fourth consecutive day while the Nasdaq hit a new high-water mark”, said Stephen Innes, head of Asia-Pacific trading at OANDA.

But Powell acknowledged uncertainty about the “outcome of current discussions over trade policy”, with US President Donald Trump hitting out at China and other economic partners as he adopts an aggressive “America First” policy.

Fears about an all-out China-US trade war continue to rattle investors, with both sides lodging counter-complaints at the World Trade Organization after recently imposing tariffs and threatening more on billions of dollars’ worth of goods.

Washington’s traditional allies Japan and the EU have also not been spared from hefty US tariffs.

In a move described by officials as a “clear message” against protectionism, the EU and Japan signed a sweeping free trade deal on Tuesday, eliminating tariffs for a wide range of products from Japanese cars to French cheese.

Tokyo rose 0.4 on the back of a cheaper yen as the dollar strengthened following Powell’s upbeat view of the US economy. Singapore gained 0.3 percent while Sydney climbed 0.7 percent.

But Shanghai lost 0.4 percent while Hong Kong ended the day down 0.2 percent.

Seoul fell 0.3 percent as South Korea’s finance minister warned that an all-out trade war between the US and China would have grim implications for the export-reliant country.

Oil extended its losses after an industry group reported a surprise increase in US inventory.

Both main contracts fell following a report late Tuesday by the American Petroleum Institute that US crude stockpiles had increased by more than 600,000 barrels last week.

After withdrawing from the Iran nuclear deal in May, the US said it would reinstate sanctions on the oil-producing nation, and warned other countries to stop purchasing Iranian exports including crude.

Traders will now be looking towards data from the US Energy Information Authority, due later Wednesday, for an indication of US demand and supply.

”  Oil has had some big falls. But every time it drops recently there seems to be some sort of supply disruption news that puts the bid back in the market,” said Greg McKenna, chief market strategist at AxiTrader.